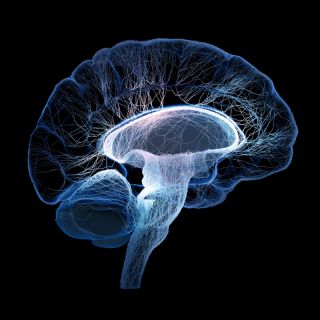 Humans may be smart because energy once devoted to brawn was given up for brains, researchers say.

The most powerful computer known is the brain. The human brain possesses about 100 billion neurons with about 1 quadrillion — 1 million billion — connections known as synapses wiring these cells together.

Humans possess more complex, powerful brains than humanity's closest living relatives, such as monkeys and apes. One reason behind this jump in brainpower may lie in how much of the human metabolism is devoted to the human brain — it consumes a whopping 20 percent of the body's total energy. [10 Surprising Facts About the Human Brain]

How the brain evolved

To gain insights into how the human brain evolved, scientists compared the metabolisms of humans and animals such as chimpanzees, mice and rhesus monkeys. They focused on how much energy each species devoted to the brain and body.

The researchers analyzed more than 10,000 compounds known as metabolites, which are small molecules formed by, or necessary to, metabolism, such as sugars and fats; the building blocks of proteins, DNA and cell membranes; and chemical signals given off by cells. They investigated metabolite levels in the kidney, thigh muscle and three brain regions — the primary visual cortex, which is involved in vision; the cerebellar cortex, which helps coordinate muscular activity; and the prefrontal cortex, which plays a major role in complex mental behavior, decision making and social behavior.

"Even after so many years of research of humans and human evolution, we still can uncover large unknown differences between humans and other species," said study author Philipp Khaitovich, an evolutionary biologist at the Chinese Academy of Sciences' Key Laboratory of Computational Biology in Shanghai.

To rule out the possibility that these changes simply reflected the modern human couch potato lifestyle, the scientists performed additional experiments on rhesus monkeys, moving them from a spacious countryside facility to small indoor homes and serving them fatty and sugary food for several weeks, all to imitate the environment and behavior of contemporary humans. These lifestyle changes had only a small effect on the metabolisms of the monkeys' muscles.

"For a long time we were confused by metabolic changes in human muscle, until we realized that what other primates have in common, in contrast to humans, is their enormous muscle strength," said lead author Katarzyna Bozek, of the Chinese Academy of Sciences' Key Laboratory of Computational Biology in Shanghai. [The 7 Biggest Mysteries of the Human Body]

Chimps are far stronger than humans. Kevin Hunt, director of the Human Origins and Primate Evolution Lab at Indiana University, once told of watching an 85-pound (38.5 kilograms) female chimp in Africa snap branches off an ironwood tree with her fingertips, one that took Hunt two hands and all his strength to break.

To see just how much stronger chimps and rhesus monkeys are than humans, the researchers conducted muscle strength tests that involved pulling weights upward. All of the human volunteers in the experiment — who included professional athletes — were outcompeted by their primate opponents by more than twofold.

The fact that metabolic changes in human muscle are paralleled by a drastic reduction in muscle strength leads the researchers to hint that human ancestors may have swapped brains for brawn.

"Our work opens a door to further studies of human metabolic uniqueness," Khaitovich said. "It is a huge field that is virtually untouched by scientists."

The scientists detailed their findings online today (May 27) in the journal PLOS Biology.