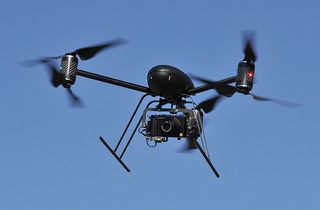 The flight habits of birds, bats and insects could inspire new designs of flying robots, say scientists who are using nature as a guide for developing innovative drone technologies.

As part of a broad investigation of bioinspired flight control, 14 different research teams are stealing ideas from nature to make novel improvements to the capabilities of drones.

"Whether this is avoiding obstacles, picking up and delivering items, or improving the takeoff and landing on tricky surfaces, it is hoped the solutions can lead to the deployment of drones in complex urban environments in a number of different ways," officials from the Institute of Physics (IOP) in the United Kingdom said in a statement. [5 Surprising Ways Drones Could Be Used in the Future]

These technologies, IOP added, could be used for a variety of purposes, ranging from "military surveillance and search-and-rescue efforts to flying camera phones and reliable courier services. For this, drones need exquisite flight control."

As part of this initiative, a group of researchers from Hungary used an algorithm to fly nine quadcopter drones as the machines followed a moving car. Anther group at Harvard University in Cambridge, Massachusetts, built a tiny drone — roughly the size of a 1-cent coin — that was capable of flying and hovering in midair.

But because a sudden gust of wind could blow the tiniest of flying robots off course, researchers recently studied how hawk moths cope with windy conditions, and how they regain control after particularly strong gusts. The researchers came from the University of North Carolina at Chapel Hill, the University of California and Johns Hopkins University in Baltimore.

Researchers from Sherbrooke University in Quebec, Canada, and Stanford University drew inspiration from flying squirrels, flying snakes and flying fish to design a "jumpglider." This drone mimics the aerodynamic mechanisms and "jumping ranges" these creatures use to avoid predators. The glider is shaped like an airplane, but also has a spring-based mechanical foot to propel the robot into the air. The researchers say the jumpglider could be used for search and rescue missions, because it is able to maneuver around rough terrain and obstacles.

The research was published online May 23, in a special issue of the journal Bioinspiration & Biomimetics.