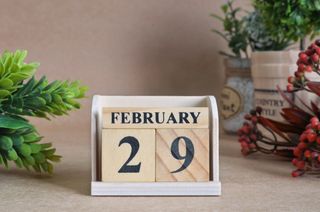 February 29 only comes around once every 4 years in the Gregorian calendar.
(Image: © Shutterstock)

In the Julian calendar, named after Julius Caesar, every fourth year had 366 days rather than 365. Roman astronomers calculated that a year — the time it takes the Earth to revolve around the sun — had a duration of 365.25 days. This method of adding a "leap day" every fourth year averaged out to this determined value.

Except, a year's length isn't 365.25 days; it's actually a bit shorter. This only became noticeable as the centuries passed and the calendar drifted out of sync with the seasons. By 16th century A.D., people noticed that the first day of spring had drifted 10 days ahead of the intended 20th of March. Basically, history had used a leap-day year 10 more times than was useful.

Related: Alien planets would likely have leap years, too

Recognizing the 10-day error, Pope Gregory XIII had a scholar (Aloysius Lilius) devise a new system that would keep the calendar in sync with the seasons. This new system changed which years should be considered leap years based on what numbers divide the years evenly.

While in a 2000-year period, the Julian calendar had 500 leap years, the Gregorian calendar only has 485. This change was based on a calculation that an average year length is 365.2425 days, which was pretty close: the modern measured value is 365.2422 days, according to NASA. This small difference, coupled with the precession of the equinoxes, amounts to the Gregorian calendar shifting a day out of sync after 7,700 years. So, we have a while to wait until this discrepancy causes any problems.

The term "leap year" didn't come about until the 14th century. The "leap" refers to the effect that leap days have on particular dates. For example, take any day, say March 9: In 2014, it fell on a Sunday. In 2015, it was a Monday, but in 2016, it was Wednesday. Because 2016 had an extra day — February 29 —  it caused the example date to "leap over" Tuesday. This works for any date, though dates in January and February will leap over a day in the year following a leap year, e.g. 2017.

Putting the calendar back in sync

At the time, such changes were considered controversial, but not nearly as controversial as the plan to put the calendar back into sync with the seasons. The Pope only had the authority to reform the calendar of Spain, Portugal, the Polish–Lithuanian Commonwealth and most of Italy, according to the Encyclopedia Britannica. In those regions, the calendar was advanced by 10 days: Thursday, Oct. 4, 1582 (of the Julian calendar), was followed by Friday, Oct. 15, 1582 (of the Gregorian calendar).

Many Catholic countries and colonies soon followed, but several protestant nations objected to losing 10 days because they didn't want to indicate fellowship with the Catholic Church. Some nations wouldn't switch over another hundred or more years. The British Empire (including the American colonies) did not adopt the change until 1752. Japan finally adopted the Gregorian calendar in 1873 and Korea in 1895. Many Eastern European nations chose to opt out until the early 20th century. Greece, in 1923, was the last European country to change.

The Gregorian calendar is often placed at the center of a narrative regarding the origin of April Fools' Day.

Under the Julian calendar, France celebrated the New Year during the week between March 25 and April 1. When France began using the Gregorian calendar, the change shifted New Year's Day to January 1. One theory suggests that folks who didn't hear about the change (or else refused to acknowledge its legitimacy) were mocked as "the April Fools," according to History.com. They were often teased and had jokes played on them on or around the old New Year. In France, this took the form of pranksters sticking fish on the backs of those who celebrated the old custom, earning the victims of the prank the name Poisson d'Avril, or April Fish.

This widely accepted origin tale doesn't explain other pranking traditions that preceded the Gregorian switch. For example, references to "April fools" are found in Chaucer's "The Canterbury Tales," written in the 14th century. And while it's true that many countries of the Middle Ages celebrated the New Year on other dates — March 25 is just the most relevant to this myth — most switched New Year's back to January 1 for reasons other than the change to the Gregorian calendar, and long before the calendar's existence.