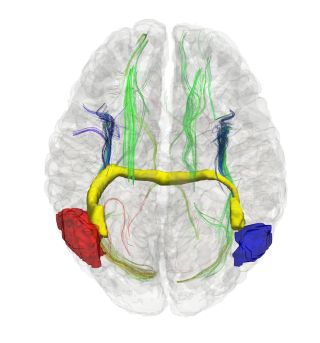 Severing the main connection between a person's brain hemispheres usually makes communication from one side to the other impossible, yet people who are born without this neural bridge have found a way around the problem, a new study suggests.

People who are born without a corpus callosum — the bundle of white matter that connects the left and right sides of the brain — develop alternate connections, the research shows. These connections may be what allow these individuals to perform tasks requiring both hemispheres, scientists say.

The findings reveal how plastic the brain really is, said Fernanda Moll, a researcher at the D'Or Institute for Research and Education in Brazil and co-author of the study published today (May 12) in the journal Proceedings of the National Academy of Sciences.

"This is something that has been unexplained — how people born without a corpus callosum can maintain a lot of communication that requires both hemispheres," Moll told Live Science. [5 Controversial Mental Health Treatments]

During the 20th century, doctors treated a variety of psychiatric conditions — ranging from hysteria to epilepsy — by cutting the corpus callosum, mistakenly believing that these disorders arose from aberrant brain wiring.

But as a result of the callostomy procedure, these so-called "split-brain" patients lost the ability to perform tasks that required both sides of their brain. For example, a person with a split brain could hold an object such as a key in their left hand (without looking at it), but would not be able to speak the name of the object, because signals from the left hand are sent to the brain's right hemisphere, whereas it's the left hemisphere that produces speech.

In 1968, neurobiologist Roger Sperry discovered that both callostomized patients and those born without a corpus callosum (a condition known as callosal agenesis) lacked all or most of the connections between brain hemispheres.

Yet unlike callostomized patients, people born without a corpus callosum retained some communication between both brain halves — for example, they could name an object held in their left hand — suggesting the information was still crossing the brain somehow. This phenomenon came to be known as the Sperry paradox.

In the new study, Moll and her team took a group of patients who lacked this vital brain bridge and gave them tests that required both hemispheres.

In contrast to the brains of healthy people and those of callostomized patients, the brains of people born with no corpus callosum had two nerve tracts that connected both hemispheres. These detour pathways could explain how these people are capable of performing tasks that require both hemispheres, the researchers said.

The findings resolve the Sperry paradox, suggesting that the brain can reorganize to circumvent missing pathways.

The condition of not having a corpus callosum is rare. Those who are born with the condition aren't always aware of the deficiency, and symptoms vary widely. Some individuals have visual or motor impairments, as well as cognitive or social difficulties, studies have shown.