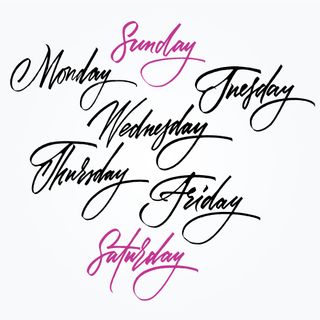 As the days pass, the cycle of the week shapes how we live our lives. Have you ever wondered, "Why is a week seven days long?" How about where the names of each weekday come from?

The seven-day week originates from the calendar of the Babylonians, which in turn is based on a Sumerian calendar dated to 21st-century B.C. Seven days corresponds to the time it takes for a moon to transition between each phase: full, waning half, new and waxing half. Because the moon cycle is 29.53 days long, the Babylonians would insert one or two days into the final week of each month.

Jewish tradition also observes a seven-day week. The book of Genesis (and hence the seven-day account of creation) was likely written around 500 B.C. during the Jewish exile to Babylon. Assyriologists such as Friedrich Delitzsch and Marcello Craveri have suggested that the Jews inherited the cycle of seven days from the Babylonian calendar.

The Romans also inherited this system from Babylonian tradition, though they didn’t begin using it until the instatement of the Julian Calendar in the first-century B.C. Up until this point the Romans had used the “nundinal cycle,” a system they inherited from the Etruscans. This was a market cycle of eight days labeled A-H. On market day, country folk would come to the city and city dwellers would buy eight days' worth of groceries. By the time the seven-day week was officially adopted by Constantine in A.D. 321, the nundinal cycle had fallen out of use.

The Romans named the days of the week after their gods and corresponded to the five known planets plus the sun and moon (which the Romans also considered planets). To this day, all Romance languages (most familiarly Spanish, French, and Italian) still bear the mark of Roman day names, the exception being Sunday, which now translates to “Lord’s Day” and Saturday, which translates to "Sabbath."

The English words for each day bear remnants of Roman tradition, but they have been filtered through centuries of Germanic and Norse mythos. The Germanic people adapted the Roman system by identifying Roman gods with their own deities.

Sunday comes from Old English “Sunnandæg," which is derived from a Germanic interpretation of the Latin dies solis, "sun's day." Germanic and Norse mythology personify the sun as a goddess named Sunna or Sól.

Monday likewise comes from Old English “Mōnandæg,” named after Máni, the Norse personification of the moon (and Sól's brother).

Tuesday comes from Old English “Tīwesdæg,” after Tiw, or Tyr, a one-handed Norse god of dueling. He is equated with Mars, the Roman war god.

Wednesday is "Wōden's day." Wōden, or Odin, was the ruler of the Norse gods' realm and associated with wisdom, magic, victory and death. The Romans connected Wōden to Mercury because they were both guides of souls after death. “Wednesday” comes from Old English “Wōdnesdæg.”

Thursday, "Thor's day," gets its English name after the hammer-wielding Norse god of thunder, strength and protection. The Roman god Jupiter, as well as being the king of gods, was the god of the sky and thunder. “Thursday” comes from Old English “Þūnresdæg.”

Friday is named after the wife of Odin. Some scholars say her name was Frigg; others say it was Freya; other scholars say Frigg and Freya were two separate goddesses. Whatever her name, she was often associated with Venus, the Roman goddess of love, beauty and fertility. “Friday” comes from Old English “Frīgedæg.”

As for Saturday, Germanic and Norse traditions didn’t assign any of their gods to this day of the week. They retained the Roman name instead. The English word “Saturday” comes from the Anglo-Saxon word “Sæturnesdæg,” which translates to “Saturn’s day.”

Time to find out if you've been paying attention! Prove it by taking the time to take this quiz:

Keeping Time: Origins of the Days of the Week