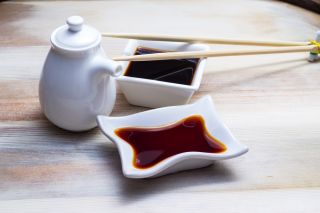 In their quest for new medications, researchers have discovered drugs in some unusual places.

Penicillin, for instance, was originally derived from a fungus called Penicillium, and quinine, a drug used to treat malaria, can be found in the bark of Cinchona trees.

Now, in a surprising discovery, researchers from the University of Missouri School of Medicine have found that soy sauce — generally used as a condiment for sushi and other Asian foods — contains a potent antiviral compound that may someday be used against the HIV virus, though the drug has yet to be tested in humans. [The 14 Oddest Medical Case Reports]

Japan-based Yamasa Corp. has been producing soy sauce since the 1600s. About 25 years ago, the company began investigating ways to make its soy sauce tastier.

In 2001, Yamasa's researchers had a eureka moment: They found that a flavor enhancer called EFdA (4′-ethynyl-2-fluoro-2′-deoxyadenosine) not only made its soy sauce taste better, but was also remarkably similar to an antiviral drug now used in the fight against HIV and AIDS.

In fact, EFdA might work even better than tenofovir (Viread), an antiviral that reduces the amount of HIV in the blood. People with HIV who take tenofovir typically develop a resistance to the drug, and are then forced to take more potent medication.

But NRTIs are so similar to reverse transcriptase that they "trick" the virus into using NRTI molecules instead when building new DNA, which inhibits the HIV virus from replicating.

A team of researchers led by Sarafianos discovered that EFdA isn't broken down as quickly by the liver and kidneys as tenofovir is. It's also more easily activated by cells, making it a potentially superior compound.

"These two reasons make it more potent than other drugs, and so our task is to look at the structural features that make it such a fantastic drug," Sarafianos said.

Working with Michael Parniak, a biochemist at the University of Pittsburgh, the researchers tested EFdA on monkeys infected with simian HIV.

"These animals were so lethargic, so ill, that they were scheduled to be euthanized when EFdA was administered," Parniak told Decoding Science. "Within a month, they were bouncing around in their cages, looking very happy, and their virus load dropped to undetectable levels. That shows you the activity of the molecule; it's so active that resistance doesn't come in as much of a factor with it."

Compounds developed by Sarafianos and his team are now being tested by New Jersey-based pharmaceutical giant Merck & Co. for their ability to halt HIV.

The new research is detailed in the journals Retrovirology, Antimicrobial Agents and Chemotherapy and The International Journal of Pharmaceutics.