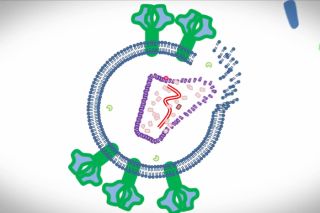 Britt Faulstick is a news officer for technology and engineering at Drexel University. He contributed this article to Live Science's Expert Voices: Op-Ed & Insights.

One of the leading obstacles in the fight against the human immunodeficiency virus (HIV), the viral precursor to AIDS, is the way the virus frequently mutates, quickly becoming immune to medication. A team of Drexel University researchers is trying to get one step ahead of HIV with a microbicide that takes a new approach: It can trick HIV into "popping" itself into oblivion.

The microbicide, called DAVEI (Dual Action Virolytic Entry Inhibitor) was invented and tested by scientists from Drexel's College of Engineering; School of Biomedical Engineering, Science and Health Systems; and College of Medicine. It is the latest in a new generation of molecules that are designed to attack HIV without harming healthy cells.

"For lack of a better term, DAVEI 'tricks' the virus into 'thinking' it is about to infect a healthy cell, when, in fact, there is nothing there for it to infect," said Cameron Abrams, a chemical engineering professor and a leader of the project. "Instead, it releases its genetic payload harmlessly and dies."

The team led by Abrams and Irwin Chaiken, a professor of biochemistry and molecular biology, developed the chimeric recombinantly engineered protein — that is, a molecule assembled from pieces of other molecules and engineered for a specific purpose, in this case to fight HIV. Still in the experimental stage, their research was recently published in the American Society for Microbiology's Antimicrobial Agents and Chemotherapy.

Learn more about the HIV-killer in this Drexel University video.