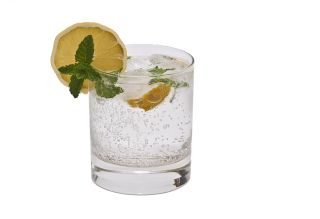 Summer is a time for popsicles and corn on the cob, watermelon and ice cream, and for some, beverages prepared with clear liquors. It’s well known that alcohol affects the body and mind in profound ways, but there’s more to a mixed drink than meets the liver. What about tonic water, that bitter, effervescent liquid so often called upon during the warmer months to serve as the yin to the yang of gin?

Tonic water originally existed as a way to deliver quinine, an antimalarial drug derived from the bark of the South American cinchona tree. In the early 1800s, a British officer in colonial India invented the venerable gin and tonic when he realized that alcohol helped the medicine go down in the most delightful way.

Today, tonic water still contains quinine, but the roles are reversed: a diluted, sweeter formulation of tonic water helps guide gin and vodka past the tonsils instead. Among foods and drinks that are ingested solely for reasons of taste, tonic water is unique in that it was first and foremost a medicine. Since medicines tend to have side effects, is it possible that a hidden health risk is swirling around in tonic water? The answer is yes, with some caveats. Quinine is still used to treat malaria today, although doctors typically reserve it for cases when the pathogen responsible for the disease displays resistance to newer drugs. However, you'd have to drink almost 20 liters of today's dilute tonic water daily to achieve the daily dose typically prescribed for malaria.

That may come as bad news for anyone hoping to cure the deadly infection with a nightly tippling session, but it should come as a relief to the rest of us, because quinine comes with side effects.

Side effects so serious, in fact, they were the reason the Food and Drug Administration banned doctors in 2010 from prescribing the drug to treat nighttime leg cramps, a frequent off-label usage. The most serious of the common side effects is thrombocytopenia, a drop in the blood's platelet count that can lead to internal and external bleeding, as well as a related condition that can cause permanent kidney damage. Worse, these and other side effects occur to some degree in up to one in 25 patients treated with medicinal doses of quinine.

Happily, the low dose of quinine found in a glass or two of tonic water isn't enough to trigger these issues in most people. However, for the unlucky few, even the small amount of quinine in tonic water can cause thrombocytopenia (doctors call this rare occurrence a "gin and tonic purpura").

People may also develop sensitivities and allergies to quinine as a result of occasional tonic water consumption, only to experience a full-blown reaction years later, upon taking a medicinal dose of quinine.

Quinine can pass through the placenta from mother to fetus and there is some limited evidence that it can cause birth defects, so pregnant women should avoid the drug unless a doctor prescribes it to fight malaria. People with the metabolic disorder glucose-6-phosphate dehydrogenase deficiency (G6PD) should also avoid it.

For the rest of us, from a health perspective, alcohol is a much more worrisome mixed-drink ingredient than tonic.

Pass it on: People may want to avoid tonic water if pregnant, or sensitive or allergic to quinine.