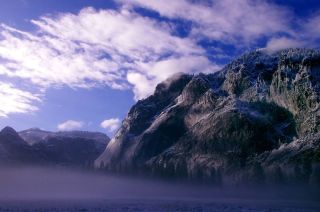 Camera-carrying drones may be the latest tech fad, but some national parks in the United States are banning the robotic flyers, with one location imposing stiff penalties for anyone who flies a drone within park boundaries.

Earlier this week, Yosemite National Park in California issued a notice prohibiting drones from the grounds. Over the years, such drone activity inside the park has become more frequent, with some people using the flying bots to film above treetops, capture aerial views of the park or record footage of climbers ascending Yosemite's famed routes.

"Visitors traveling to the park should be aware that the use of drones is prohibited while visiting the park and should not be utilized at any time," National Park Service officials said in a statement. [5 Surprising Ways Drones Could Be Used in the Future]

The ban cited part of the Code of Federal Regulations, which states, "delivering or retrieving a person or object by parachute, helicopter or other airborne means, except in emergencies involving public safety or serious property loss, or pursuant to the terms and conditions of a permit," is illegal. The regulation applies to drones of all shapes and sizes, the National Park Service said.

In addition to raising safety concerns, drones could disturb animals that live within the park, or ruin the experiences of other visitors to national parks.

"Drones can be extremely noisy, and can impact the natural soundscape," National Park Service officials said in a statement. "Additionally, drones can have negative impacts on wildlife nearby the area of use, especially sensitive nesting peregrine falcons on cliff walls."

In fact, volunteers at Zion National Park in Utah recently reported seeing a remote-controlled drone fly close to a herd of bighorn sheep. Park officials said the disturbance caused the animals to scatter, separating young sheep from the adults.

"I am sure most people who fly drones have no desire to harm wildlife or endanger our other visitors," Jim Milestone, park superintendent, said in a statement. "Many may not even know that it is illegal to fly a drone here at Zion. We hope that by educating the public about the reasons behind the restrictions, we will increase their understanding and compliance, and help to protect the park."

Flying a drone within the boundaries of Zion National Park can result in a penalty of up to six months imprisonment or a fine of $5,000.

"Drones are a new challenge for Zion National Park and our mission of resource protection," wildlife biologist Cassie Waters said in a statement. "Animals can be injured when attempting to escape or avoid drone activity. Drones can also change the natural behavior of wildlife and lead to unnecessary energy expenditures. This has the potential to affect survival and reproduction success in many species. We are therefore really concerned with drones, their effect on wildlife and our ability to preserve the natural environment."