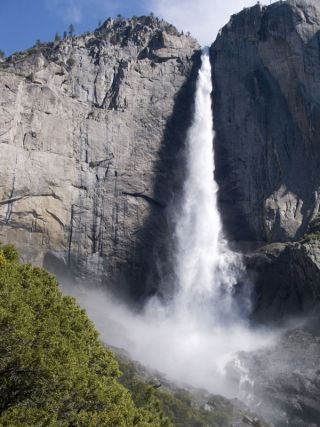 Yosemite National Park, created in 1890, is one of the oldest nature preserves in the United States. A wonderland of geological formations and biological diversity, the park spans nearly 1,200 square miles on the western slope of the Sierra Nevada range in central eastern California. More than 3 million visitors each year flock to see Yosemite’s grandeur. It was designated as a UNESCO World Heritage Site in 1984.

The land that Yosemite comprises has attracted people for centuries. The Ahwaneechee Native Americans lived in the Yosemite Valley for at least 4,000 years. Non-native trappers arrived in 1827. In 1848, the California Gold Rush brought thousands of people to the area. Theft and murder of native peoples resulted in the Mariposa Indian War, which ended in 1851.

Famed naturalist John Muir fell in love with Yosemite and became the chief voice in its preservation. Muir helped draw up the park’s proposed boundaries and wrote eloquent articles about its beauty and importance. These efforts helped lead to the park’s establishment in 1890. Two years later, Muir founded the Sierra Club to further promote the area’s protection.

Over the years, the boundaries of the park have grown as logging, dams and other human forces have threatened the park. Today, the National Park Service works to ensure the park’s preservation.

Muir wrote, “No temple made with human hands can compare with Yosemite” — and with good reason. The park boasts spectacular granite formations, crystal-clear streams, majestic waterfalls, ancient giant sequoias, two major rivers (the Merced and Tuolumne) and much more. Many of these features can be seen from Yosemite Valley, though all are worth exploring in depth. Some highlights include:

Half Dome: The most iconic site of Yosemite, Half Dome is a granite formation that rises nearly 5,000 feet above the valley floor. It gives the impression of a giant granite dome with its Northwestern half missing, creating a sheer vertical drop. Half Dome’s unique shape is the result of glacial interaction with underlying rocks. It is an excellent example of an exfoliation dome, in which underground pressure caused the rock to crack off in thin shells, leaving a clean surface. It is unlikely that there was ever a fully-formed other half of the dome.

Half Dome is a popular — though difficult — day hike. The most challenging part of the hike is at the end, when hikers must ascend the final 400 feet by cables.

El Capitan: This stunning vertical rock is the largest granite monolith in the world. It rises more than 3,000 feet above the valley floor and is a favorite for experienced rock climbers.

Yosemite Falls: This is the tallest waterfall in North America. Snow runoff cascades down the 2,425 foot drop, with peak flow in May. In winter, an ice cone is often visible at the top of the falls.

Bridalveil Falls: A 620-foot waterfall of delicate beauty, Bridalveil Falls is located near the entrance of Yosemite Valley. Water roars during the springtime peak flow; during the rest of the year, its namesake light, dancing flow is on display.

Mirror Lake: Though it’s more of a pond than a lake, this Yosemite Valley spot is an extremely popular destination. It boasts glorious reflections of Half Dome and Mount Watkins in spring, when the water level is high enough.

Meadows: Yosemite’s peaceful meadows and wetlands are the best place to spot the park’s unique flora and fauna. Bears, deer, foxes, bald eagles, raccoons, and more may be seen amidst the wildflowers and lush grasses. The most popular meadows — which have boardwalks and trails — are Cook’s, Sentenial, Stoneman and Leidig.

Giant Sequoias and Mariposa Grove: Mariposa Grove is blessed with about 500 mature giant sequoias. Giant sequoias can live to be 3,000 years old and are the largest known living things on earth. Visitors can hike or take a tram ride to see Mariposa’s sequoias.

Yosemite offers many camping options. There are 13 campgrounds, and seven can be reserved (reservations are essential from April through September). While many have tap water and flush toilets, only Curry Village and Housekeeping Camp have showers.

Those who want a roof over their heads have no shortage of choices. The Ahwahnee Hotel and historic Wawona Hotel offer plenty of comfort, while canvas- and hard-sided cabins at Curry Village, White Wolf Lodge, and others provide a back-to-nature feel without the tents.