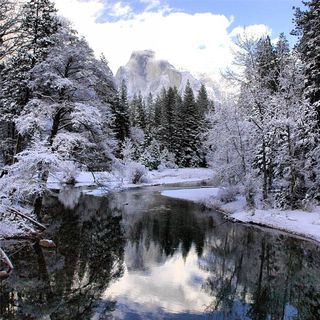 (Image: © U.S. Department of the Interior)

Yosemite National Park is stunning in any season, but it absolutely sparkles in wintertime.

"No temple made with hands can compare to Yosemite," the naturalist John Muir famously said. When this stunning landscape is covered in snow, as seen in the image above, the park looks more like uncharted territory than a place where 3.7 million people visit each year.

Established as a protected area in 1864, Yosemite is one of the most popular national parks in America. And for good reason — the park is home to famous waterfalls, mountains, meadows and ancient giant sequoias.

One of the park's most popular attractions is the 2,425-foot (740 meter) Yosemite Falls, which ranks as the tallest in North America. Look for the ice cone at the base of the upper fall during winter.

The park is open year-round, but many roads close in the winter due to heavy snow. Forget about climbing Half Dome or seeing a moonbow this time of year — but, of course, there's still plenty to do. Badger Pass is a great spot for downhill skiing, and cross-country skiing and snowshoeing are allowed through much of the park. Yosemite even has backcountry ski huts for those seeking solitude deep in Yosemite's winter wilderness.

Bring a camera. You never know when Yosemite will surprise with its beauty.