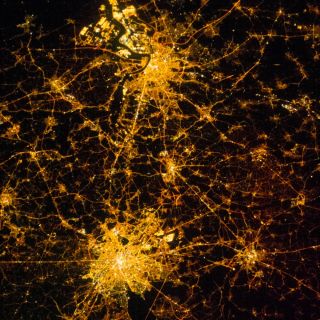 The lights of Brussels and Antwerp take center stage in a new astronaut photograph snapped from the International Space Station.

Taken on March 5, the nighttime image shows Belgium's capital and largest city, Brussels. About 1.2 million people make their home there, with an additional 600,000 or so living in the greater metropolitan area. An extra-bright spot on the northeast edge of the city is the Brussels airport, according to NASA's Earth Observatory.

North of Brussels is Antwerp, a city of about 480,000 people. The Scheldt River, visible as a dark meander in the image, runs west of the city.

City lights can be frustrating for astronomers, because light pollution drowns out views of the stars. Even remote telescopes are affected, and energy-saving LEDs, which emit blue light, cause more problems than traditional yellow streetlights.

Excess nighttime light also alters animal behavior. Light pollution has deterred sea turtles from nesting on brightly lit beach spots in Israel, according to a March 2013 study in the journal Biological Conservation. Both insect- and fruit-eating bats also prefer deep darkness to night light. A study in the March issue of the Journal of Applied Ecology found that fruit bats may be dazzled by artificial light. Light pollution could thus stymy reforestation in tropical forests, because bats are major seed-spreaders in Central America.

There are some oases of darkness remaining, however. In 2013, the International Dark-Sky Association named Death Valley National Park a "dark sky park." Inside the park, sky objects are visible that can only be seen from the darkest spots on the planet.