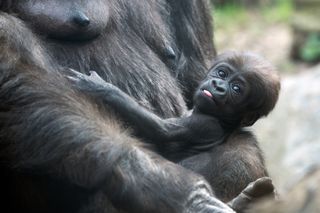 The newborns, which are part of a cooperative breeding program to enhance genetic viability of zoo animals, are the first gorillas born at the Bronx Zoo since 2006. The babies represent the 14th and 15th born at the zoo's Congo Gorilla Forest exhibit since it opened in 1991. Fifty gorillas have been born at the zoo since 1972. [See Video of Bronx Zoo Baby Gorillas]

Currently, the zoo cares for 20 gorillas — the largest group of these apes in North America.

Gorillas have a gestation period of 8.5 months, and babies weigh about 4 to 5 pounds (1.8 to 2.3 kilograms) at birth. Mother gorillas will hold their baby until it is 4 months old. The little ones start eating solid food at 6 months, but continue nursing until 3 or 4 years of age.

Western lowland gorillas are listed as critically endangered by the International Union for Conservation of Nature (IUCN). In the wild, the animals inhabit tropical and subtropical forests in equatorial Africa. They are mostly vegetarian, eating fruits, plants and some insects. They spend most of the time on the ground, but are also superb climbers.

The babies, whose genders are currently unknown, will be on display at the zoo this spring, but whether visitors can see them on any given day will depend on the weather and other factors.