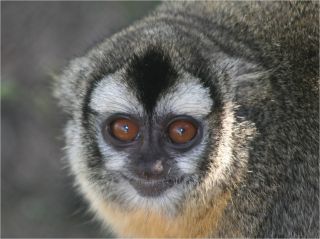 Unlike many humans, some monkeys are genuinely faithful to their mates.

A species known as Azara's owl monkeys tends to be monogamous, according to a new study of these primates. The research also found that the monkeys' inclination to be faithful was related to the male monkeys' tendency to care for their offspring.

"They [Azara's owl monkeys] live in pairs, so, in a group, we have only one adult male and one adult female, and both of them are faithful," study author Maren Huck, a professor at the University of Derby in England, told Live Science.

"We found a link between... parental care and having few instances of cheating," Huck said.

Researchers had known before this study that members of the Azara's species were socially monogamous, which means that males and females live in pairs. But in animals, including humans, social monogamy is not always equivalent to what researchers call genetic monogamy, where females and males only reproduce with their mates. [Image Gallery: 25 Primates in Peril]

One way researchers can check for genetic monogamy is to analyze the DNA of mating pairs, and check the paternity of the offspring. In the study, the researchers analyzed field observations of the monkeys' behavior, along with genetic samples from a total of 128 monkeys, including some that lived in groups, and others that were solitary "floaters." The material used by the research team included samples from 35 offspring that were born to 17 reproducing pairs.

The researchers found that both male and female monkeys in the study were faithful to their mates, and that all the offspring were indeed genetically related to their male parents.

When males care for offspring, it does not necessarily cause their partners to be monogamous, Huck said, and it is hard to say which came first, but the two may reinforce each other.

It's thought that, in general, a male can gain more by caring for his offspring than by trying to find additional mates. This is especially true in species in which females may be hard for males to find, because of the conditions in which the animals dwell.

The new study may lend an insight into the mechanisms behind pair bonding, which does not necessarily go together with monogamy, and parental mechanisms in other species, including humans.

"Pair bonding — love, if you want — is prevalent in all human societies, whereas fathering is much more variable," study author Eduardo Fernandez-Duque, an associate professor of anthropology at the University of Pennsylvania, said in a statement. "The owl monkey story is suggesting that, under very specific ecological settings, this preference for each other leads to the pair spending a lot of time in close proximity, thus facilitating paternal care and increasing paternity certainty. Genetic monogamy is the result."

On the other hand, things are often more complicated with humans, and "the extreme form of paternal care" observed in Azara's owl monkeys is hard to find. In fact, humans often do the exact opposite.