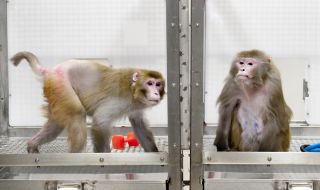 Rhesus monkeys 27-year-old Canto, on a restricted diet (left), and 29-year-old Owen, a control subject on an unrestricted diet (right), were photographed at the Wisconsin National Primate Research Center at the University of Wisconsin-Madison on May 28, 2009.
(Image: © Jeff Miller, University Communications, UW-Madison)

The results suggests that calorie restriction could improve longevity and health in other primates, including humans, the researchers said.

"This study is important because it shows that the beneficial effects we have seen consistently in lower organisms also occur in primates, and therefore supports the belief that caloric restriction would have beneficial effects in humans," author Ricki Colman, a senior scientist at Wisconsin National Primate Research Center, told Live Science.

In the study, the researchers followed 76 rhesus monkeys. Half the monkeys started eating a diet that was reduced in calories by 30 percent when they were between 7 and 14 years old. The other half did not follow any calorie restrictions. [Gallery: Monkey Mug Shots]

The finding that the monkeys "on a diet" lived longer and were less prone to disease seems to contradict the results of a 2012 study of 120 monkeys, some of which were also calorie-restricted. That study did not find any differences in the survival of monkeys who ate restricted diets and those that didn't, according to the researchers at the National Institute of Aging.

There are several factors that can explain the discrepancy between the two studies, Colman said, such as differences in the diet composition, how the animals were fed, where they were from and at what age they entered the study.

Another reason the earlier study did not find a difference may have been because the control animals (those that were supposed to eat a regular, non-calorie-restricted diet) were actually mildly calorie- restricted, based on their body weights, Colman said.

Moreover, five of the monkeys in the 2012 study, one of which was officially calorie-restricted, lived for more than 40 years, an age that was "previously thought to be the maximum life span in this species of monkey," she said.

Therefore, the results of the two studies may actually complement, not contradict each other, and show that caloric restriction is beneficial, Coleman said.

Previous studies have shown the positive effect of a calorie-restricted diet on the longevity of flies, yeast and rodents. Whether primates, including humans, may also benefit has remained unclear, but the new study suggests humans may also benefit from calorie restriction, the researchers said.

"We study caloric restriction because it has such a robust effect on aging, and the incidence and timing of age-related disease," study author Rozalyn Anderson, an assistant professor of geriatrics at the University of Wisconsin, said in a statement.

There is enormous interest in drugs that may affect the mechanisms that are active in caloric restriction, Anderson said.