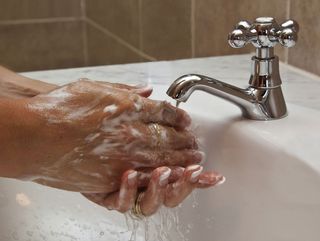 Despite their widespread use, antibacterial soaps appear to have little or no benefit for average people using them at home, likely because people use them incorrectly, one researcher says.

Over the past two decades, the number of products containing the antimicrobial ingredients triclosan and triclocarban has increased rapidly, to more than 2,000 products in 2014, according to a new review paper by Rolf Halden, director of the Center for Environmental Security at Arizona State University. These products include soaps, detergents, clothing, toothpastes and even pacifiers, Halden said.

As a consequence, more people are exposed to these chemicals: about three-quarters of Americans have detectable levels of triclosan in their urine, Halden said.

Antibacterial products have been shown to be effective at killing microorganisms in hospitals and other healthcare settings, and toothpaste with triclosanmay help people with the gum disease gingivitis, Halden said. But there's little evidence that these products are any more beneficial than regular soap for the general population, Halden said. [12 Worst Hormone-Disrupting Chemicals]

This lack of benefit may be because people often do not use the products correctly: To effectively kill microbes, people need to wash their hands with antibacterial products for 20 to 30 seconds, but studies show people use the soaps for just six seconds on average, Halden said.

What's more, studies suggest microbes can adapt to these chemicals, and this adaptation may increase their resistance to the antibiotics that are used to treat infections, Halden said. And some studies in animals suggest the chemicals affect hormones in the body.

Regulation of these chemicals could be crucial in preventing the careless use of antimicrobial products, Halden said. In fact, late last year, the Food and Drug Administration said that antibacterial chemicals will need to be removed from personal care products unless the companies can prove that these chemicals are safe and effective.

"The FDA's move is a prudent and important step toward preserving the efficacy of clinically important antibiotics, preventing unnecessary exposure of the general population to endocrine disrupting and potentially harmful chemicals, and throttling back the increasing release and accumulation of antimicrobials in the environment," Halden said in a statement.

Rules that would limit the sale of triclosanand triclocarbancontaining products to pharmacies only, and require a prescription for triclosan-containing toothpaste could reduce the use of these products, Halden said.