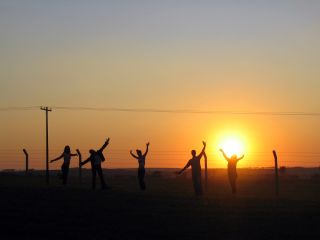 Brightening up your office or room with extra light could make you more alert and keep the afternoon energy slump at bay. People exposed people to bright white light were more awake and had increased activity in brain regions involved in alertness and some cognitive processes. To fight off nighttime drowsiness, scientists suggest blue light could do the trick. But missing out on sleep can backfire, since shut-eye could help your brain seal in what you learned during the day.

There's a new incentive to doing good things for others: It makes you happier, according to a new study.

Michael Steger, a psychologist at the University of Louisville in Kentucky, has always been amazed by how differently people lead their lives. Pat Tillman, for example, left the NFL to enlist in the Army and fight in Iraq and later Afghanistan (where he was killed), Steger said, but celebrity and socialite Paris Hilton continually pursues “a public life of shallowness.”

To find out, he and his colleagues asked a group of 65 undergraduates to complete an online survey each day for three weeks that assessed how times they participated in hedonic, or pleasure-seeking behaviors, versus meaningful activities, such as helping others, listening to friends’ problems and/or pursuing one’s life goals.

The surveys asked the subjects how much purpose they felt their lives had each day and whether they felt happy or sad. The subjects also completed two sets of questionnaires at the beginning and end of the study to assess how they felt about their lives more generally.

They found that the more people participated in meaningful activities, the happier they were and the more purposeful their lives felt. Pleasure-seeking behaviors, on the other hand, did not make people happier.

Realizing that some people may feel guilty about reporting pleasure-seeking behaviors, Steger and his colleagues then modified the survey questions slightly to make them seem less exceptionable, and asked a new group of students to perform the study again, this time over a four-week period. The psychologists got the same results.

“A lot of times we think that happiness comes about because you get things for yourself,” said Richard Ryan, a psychologist at the University of Rochester, who was not involved in the study. But “it turns out that in a paradoxical way, giving gets you more, and I think that’s an important message in a culture that’s pretty often getting messages to the opposite effect.”

In order to make sure that the relationship between happiness and doing good wasn’t the other way around—that happiness instead leads people to do good things—the researchers looked at which tended to come first. They found that the subjects became happier after they did something good, suggesting that happiness does, in fact, come about as a result of doing good things.

The results of the study, to be published in the Journal of Research in Personality, present an “enormously optimistic picture of people, that as a cynic, I was very happy to see,” Steger told LiveScience.