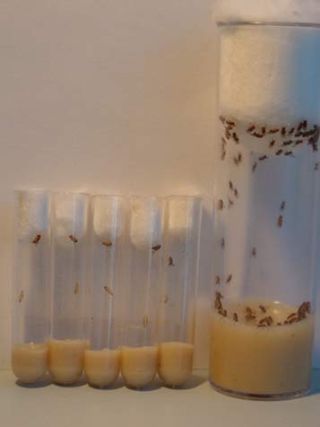 Flies were socialized or isolated from birth in the new experiment.
(Image: © Indrani Ganguly-Fitzgerald)

After a long day spent socializing or learning who to flirt with, fruit flies apparently need to sleep longer, shedding light on what sleep may actually do for humans, scientists now find.

Sleep remains a mystery. To delve into why people need to sleep, neurogeneticist Indrani Ganguly-Fitzgerald at the Neurosciences Institute in San Diego, Calif., and her colleagues Paul Shaw and Jeff Donlea at Washington University in St. Louis experimented with fruit fly genetics and behavior.

"Flies do most things that humans do—they eat, they sleep, they fight, they mate, they forage for food," Ganguly-Fitzgerald told LiveScience. Just as is often the case with humans, flies sleep a lot as young ones, sleep little as they get older, and "stay awake more after being fed caffeine and become sleepy in response to anti-histamine compounds," she said.

One idea scientists have about sleep is that our brains require it to process what we experienced during the day. The researchers found normal fruit flies that were allowed to socialize took hour-long daytime naps, compared to 15-minute catnaps taken by the isolated insects.

Their need for sleep grew with the size of the group they socialized with.

Investigating memory-related genes in the flies revealed many were linked with the effect of socialization on sleep. To further experiment with how learning and development of memories affected sleep, Ganguly-Fitzgerald and her colleagues trained male fruit flies to not court females, by tricking them with unreceptive "females," who were really males generating an aphrodisiac female scent.

These findings suggest the brain may need sleep to bring about changes related to learning and social experiences. By further investigating which genes are linked with sleep, future research could determine what genes are linked with human sleep disorders, to help lead to "drug discovery and cures," Ganguly-Fitzgerald said.