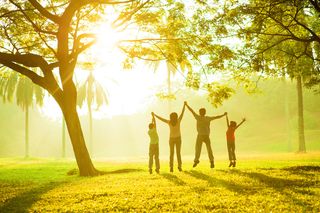 "It requires some effort to achieve a happy outlook on life, and most people don't make it." —Author and researcher Gregg Easterbrook

Psychologists have recently handed the keys to happiness to the public, but many people cling to gloomy ways out of habit, experts say.

Polls show Americans are no happier today than they were 50 years ago despite significant increases in prosperity, decreases in crime, cleaner air, larger living quarters and a better overall quality of life. [10 Scientific Tips For Raising Happy Kids]

Happiness is 50 percent genetic, says University of Minnesota researcher David Lykken. What you do with the other half of the challenge depends largely on determination, psychologists agree. As Abraham Lincoln once said, "Most people are as happy as they make up their minds to be."

What works, and what doesn't

Happiness does not come via prescription drugs, although 10 percent of women 18 and older and 4 percent of men take antidepressants, according to the Department of Health and Human Services. Anti-depressants benefit those with mental illness but are no happiness guarantee, researchers say.

Nor will money or prosperity buy happiness for many of us. Money that lifts people out of poverty increases happiness, but after that, the better paychecks stop paying off sense-of-well-being dividends, research shows.

One route to more happiness is called "flow," an engrossing state that comes during creative or playful activity, psychologist Mihaly Csikszentmihalyi has found. Athletes, musicians, writers, gamers, and religious adherents know the feeling. It comes less from what you're doing than from how you do it.

Sonja Lyubomirsky of the University of California at Riverside has discovered that the road toward a more satisfying and meaningful life involves a recipe repeated in schools, churches and synagogues. Make lists of things for which you're grateful in your life, practice random acts of kindness, forgive your enemies, notice life's small pleasures, take care of your health, practice positive thinking, and invest time and energy into friendships and family.

The happiest people have strong friendships, says Ed Diener, a psychologist University of Illinois. Interestingly his research finds that most people are slightly to moderately happy, not unhappy. [7 Ways Friendships Are Great for Your Health]

Some Americans are reluctant to make these changes and remain unmotivated even though our freedom to pursue happiness is written into the preamble of the Declaration of Independence.

Don't count on the government, for now, Easterbrook says.

Our economy lacks the robustness to sustain policy changes that would bring about more happiness, like reorienting cities to minimize commute times.

The onus is on us.

"There are selfish reasons to behave in altruistic ways," says Gregg Easterbrook, author of "The Progress Paradox: How Life Gets Better While People Feel Worse" (Random House, 2004).

"Research shows that people who are grateful, optimistic and forgiving have better experiences with their lives, more happiness, fewer strokes, and higher incomes," according to Easterbrook. "If it makes world a better place at same time, this is a real bonus."

Diener has collected specific details on this. People who positively evaluate their well-being on average have stronger immune systems, are better citizens at work, earn more income, have better marriages, are more sociable, and cope better with difficulties.

Lethargy holds many people back from doing the things that lead to happiness.

Easterbrook, also a Visiting Fellow at the Brookings Institute, goes back to Freud, who theorized that unhappiness is a default condition because it takes less effort to be unhappy than to be happy.

"If you are looking for something to complain about, you are absolutely certain to find it," Easterbrook told LiveScience. "It requires some effort to achieve a happy outlook on life, and most people don't make it. Most people take the path of least resistance. Far too many people today don't make the steps to make their life more fulfilling one."

University of Pennsylvania’s Martin Seligman offers questionnaires for assessing your happiness, beating depression and developing insights into how to be happier on his web site.