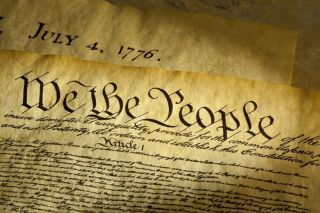 In real life, stealing the Declaration of Independence would not be as easy as Nicholas Cage made it look in the film "National Treasure."

The historic document is displayed at the U.S. National Archives in Washington, D.C. — encased in a thick frame of titanium and aluminum, behind a pane of bulletproofglass and with a protective UV-light filter.

A $3-million camera system keeps a protective watch over the precious artifact. The Charters Monitoring System, designed by scientists at NASA's Jet Propulsion Laboratory in Pasadena, California, can detect the slightest ink-flaking or fading, along with changes in light or temperature. The system can detect damage before the human eye can even spot it, experts say. [50 Fabulous Fourth of July Facts]

However, the Declaration of Independence did not always have such a hallowed home, and was not always so meticulously preserved. Over the course of history, the document has been rolled up and hastily stored in canvas tubes, sailed up the Potomac River where it risked water damage, and suffered damaging sunlight for years. Ironically, the Founding Fathers' desire to preserve the document actually contributed to its wear and tear.

The original Declaration of Independence is written on parchment, a delicate and non-durable material made from stretched out animal skin. During the American Revolutionary War, members of the Continental Congress carried the declaration with them, rolled up into a tight tube. This repeated rolling and unrolling wore down the parchment and stretched it even thinner. The thinned-out document became much more likely to crack and tear.

However, the real damage came when the Founding Fathers decided they needed to make copies of the declaration. In the 18th century, it was common to take "press copies" by placing a damp sheet of paper on the original document to soak up some of the ink. Then, the ink copy was transferred to a copper plate that could be used to make several duplicates.

Timothy Matlack, a revolutionary leader and one of the official scribes of the Declaration of Independence, copied the official document. Then, 56 delegates signed it in iron ink, which is made with an acidic chemical compound that bleeds into parchment. The staining makes the ink last longer, but around 1817, just 40 years after the declaration was signed, records show that the signatures were already fading from the original, likely due to this rough copying method.

The wetness from the old copying method also damaged the parchment itself. The animal skin is not tanned before it's turned into parchment, so the material is sensitive to even the slightest bit of moisture. [7 Great Dramas in Congressional History]

In the mid-1800s, Secretary of State Daniel Webster thought the declaration should be preserved a little more carefully, and had it hung in a frame in what is now the National Portrait Gallery in Washington, D.C. However, the frame was hung directly across from a window, exposing the document to sunlight for roughly 30 years. This long exposure caused the ink and parchment to break down even faster, making the document look old and yellowed, while bleaching the signatures to the point that they were barely legible.

Finally, in 1876, just in time for the declaration's 100th birthday, government officials got more serious about preserving the historic document. Congress charged the Smithsonian Institution and the Library of Congress to come up with a long-term preservation plan. The wet copies made during the previous century removed some of the original ink, so the committee decided it would be too risky to try to chemically restore the document. Instead, they sealed the declaration between two glass plates to keep out humidity, and placed the document in a safe to keep it away from light.

When the declaration was turned over to the Library of Congress in the 1920s, it was put behind glass specially designed to block out UV light. But in the wake of the attack on Pearl Harbor, on Dec. 7, 1941, the document was taken out of its casing and evacuated to Fort Knox, a U.S. Army base in Kentucky. The top right corner of the document tore off during this move, and got a sloppy patch-up job with scotch tape and glue before the expert handlers showed up, according to the Library of Congress. Since the document was already out of its case, the experts not only removed the tape and glue and reattached the corner, but also took the opportunity to repair small nicks and tears that covered the parchment.

After World War II, the Declaration of Independence was placed in a helium-filled frame to control humidity; the frame was also fitted with a glass filter that blocks out harmful light and prevents damage from air pollution. The document now hangs in the National Archives, where experts believe it will last many more years.