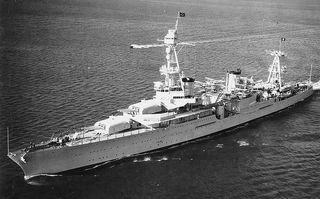 The U.S. Navy, in partnership with the Indonesian Navy, is planning to dive later this month to the sunken USS Houston, a World War II-era shipwreck, according to Navy officials.

The mission's purpose is to assess the vessel's condition and allow salvage and rescue divers to train at a real shipwreck site. U.S. and Indonesian Navy divers will share best practices and techniques during the training exercises onboard the rescue and salvage ship USNS Safeguard (T-ARS-50).

The outings are part of the Cooperation Afloat Readiness and Training (CARAT) 2014, annual military training exercises conducted by the U.S. Navy and allied nations in Southeast Asia that aim to address shared maritime security concerns and strengthen relationships and operations among navies, officials said. [Shipwrecks Gallery: Secrets of the Deep]

The USS Houston was sunk in World War II during the Battle of Sunda Strait on Feb. 28, 1942, killing more than 700 crewmembers. The ship, Northampton-class heavy cruiser spanning 570 feet (174 meters) and weighing 9,050 tons (8,210 metric tons), was commissioned in 1930 and was the flagship of the Asiatic fleet at the time it sank.

Under customary international law, the vessel remains property of the United States. A popular dive site, the wreck lies off the west coast of Java, Indonesia, which is one of nine countries participating in the CARAT exercises.

"Working with our Indonesian navy partners, CARAT 2014 offers an excellent opportunity to conduct this diving exchange as part of our shared training goals, while also allowing us to determine the condition of a ship that is an important part of the U.S. Navy's heritage in this region," Rear Adm. Cindy Thebaud, commander of Naval Forces CARAT, said in a statement.

The divers will inspect the wreck for signs of illegal salvage. Underwater archaeologist Alexis Catsambis from the Naval History and Heritage Command (NHHC) will support the mission, as part of an effort to document the preservation of the USS Houston. In addition to human divers, the mission will use sonar sensing systems and a remotely operated vehicle to inspect the wreck. Catsambis and the NHHC's Underwater Archaeology Branch will compile the findings into a formal report on the ship's condition.

More than 17,000 U.S. Navy sunken ship and aircraft wrecks exist worldwide. The wrecks may represent war graves, harbor state secrets or be of other historical value. The wreck sites may also represent environmental or safety hazards if, for instance, the sunken vessels are leaking oil or contain unexploded ammunition.

While the Navy cannot survey every military wreck, officials said, "Navy leadership desires to ensure the final resting place of those who made the ultimate sacrifice when the ship went down remains in a respected and solemn condition."