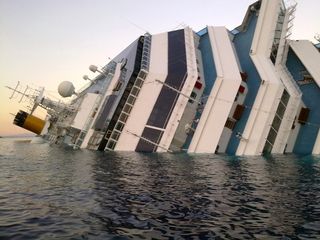 The Costa Concordia lies on its side off the Italian Coast
(Image: © © Lupoalb68 | Dreamstime.com)

A team of engineers last week successfully righted the 114,500-ton (103,900 metric tons) Costa Concordia cruise ship, which ran aground off the coast of an Italian island in January 2012.

Shipwrecks are removed for two reasons: salvage or wreck removal. Ships are salvaged if they contain valuable material that can be retrieved and resold. Wreck removal applies to ships that have no value but pose a threat to the environment or a hazard to navigation if they are not cleaned up.

Salvage companies employ crews of seamen and engineers, called salvors, who operate heavy machinery, such as cranes and floating docks, to maneuver wrecks so they can be towed safely to land.

The salvage business has a rich history. "It's a small industry, and we know our own history quite well," said Rich Habib, managing director of the company Titan Salvage. [Disasters at Sea: 6 Deadliest Shipwrecks]

Raising the Costa Concordia was the largest wreck removal in history, Habib told LiveScience. The operationrequiring 500 engineers and costing more than $800 million (600 million euros). The luxury vessel hit a rock and capsized near the island of Giglio, killing 32 people. The fuel was removed within a couple of months after the wreck, but the rusting hulk hadn't been moved until last week.

The operation took 18 hours to complete, but more work remains. More caissons will be attached to the ship's other side, and the water inside the caissons on both sides will be pumped out. The air-filled containers will create buoyancy, lifting the giant ocean liner to the surface so it can be floated away and dismantled for scrap.To right the ship, engineers built underwater platforms and secured the ship to them using cables. They attached water- filled tanks, known as caissons, to the hull as a counterweight. On Sept. 16, in a process called parbuckling, the ship was rolled upright by winching in the cables. [Watch a time-lapse video of the salvage]

Raising the Costa Concordia was an impressive affair, but it's just the latest in a long history of wreck removal and salvage.

Days before then end of World War I, the German Navy scuttled (deliberately sank) most of its High Seas Fleet in the Scapa Flow off Scotland in June 1919. In the decades that followed, salvors recovered 45 of the 52 warships on the seafloor.

Jack Moar, a forge worker in Stromness, Scotland, led the salvage of the first destroyer in 1922, which lay in shallow water and was refloated and towed to Stromness Harbor and hauled ashore. JW Robertson salvaged some of the smaller vessels by attaching two enormous buoyancy bags to the ships and hauling them up using cables strung underneath the ship, and pulled up by two concrete barges with a framework of girders.

Engineer Ernest Cox salvaged most of the ships. Cox used a gigantic floating dock cut into two L-shaped sections, which he positioned on either side of a ship to raise it. His first attempt to raise a torpedo boat destroyer with chains wrapped underneath the vessel failed when the cables broke, so he used wire cables instead. Between 1924 and 1926, Cox successfully raised 26 destroyers. In 1930, he raised the Hindenburg, which had been one of the German Navy's largest ships.

In the 1930s, other companies took over the salvage of the remaining ships — which included several large battleships — removing the armor plate, the valuable hard steel covering of the ships. Salvors used explosives to break up some of the material, which could then be recovered.

Throughout history, many other seagoing vessels have met a fate similar to that of the Costa Concordia and the High Seas Fleet.

Shipwrecks conjure an image of being marooned out at sea, but several notable shipwrecks have occurred inside of harbors. The USS California and the USS West Virginia were destroyed during the Japanese attack on Pearl Harbor in 1941. Both were later refloated and repaired. The Swedish warship Vasa, which sank on its maiden voyage out of Stockholm harbor in 1628, was also salvaged and now rests in a museum.

And shipwrecks aren't the only kind of vehicles that have been salvaged; salvors also work on airplane wrecks. The deepest salvage operation in history occurred at a depth of 16,000 feet (4,900 meters), and involved searching for the wreckage and flight recorders from South African Airways Flight 295, which crashed in the Indian Ocean on Nov. 28, 1987.

Today's salvage operations share many of the same tools, but some things are changing. For instance, salvages are getting bigger, thus requiring more force and bigger machines, and removal operations are getting deeper, because wrecks are being removed from deeper water for environmental reasons, Habib said.