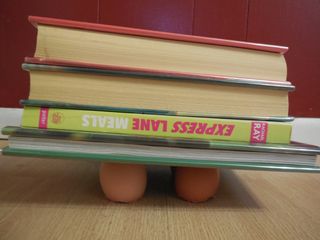 Eggshell domes can support several books. How many can you stack?
(Image: © Mary Bagley.)

Did you know that Easter eggs are wonderful materials for a little fun science? Try some of these fun science activities and find out how interesting your Easter eggs can be!

You may want to try this over the kitchen sink or place the egg in a zippered plastic bag.

To test the strength of an eggshell, place a raw egg in the palm of your hand.  Squeeze the egg in your palm using an even pressure. Next, put your thumb and index finger on the ends of the egg and squeeze. Can you break the egg this way?

For the second test you will need four raw eggs; it’s best if they are close to the same size.

First, take a raw egg and place it gently in a glass jar. Fill the jar with water and set it aside for at least 15 minutes. Observe the egg through the glass. You should see bubbles forming around the egg, evidence that gases are moving through the shell through tiny openings invisible to the naked eye.

In the first and second experiments, we explored the strength of eggshells and the density of eggs using salt water. In these experiments we will look at inertia and proteins.

For this experiment, you will need one raw egg and one that has been hard-boiled. Mark the shells with a crayon so you will remember which has been cooked. Place both eggs, lying on their sides, on a smooth flat surface. Use your fingers to twirl the eggs until they are spinning rapidly, and then quickly use one finger to stop the motion. Be quick to lift the finger as soon as the egg stops moving!

(Hint: The liquid center of the raw egg was in motion as well.)

(Another hint: The one that resists changes to its motion has greater inertia.)

An egg has two edible layers inside of it, the yellow yolk and the translucent egg white or albumen. The albumen is made up of protein, water and vitamins like riboflavin and niacin. In a fertilized egg, the albumen provides the developing chick with protein and water, and then helps lubricate the inside of the shell when it is time for the baby bird to hatch.

Thinking about the science

The albumen is made up of protein and water. Proteins are very long chains of molecules that are folded up. Beating the egg whites causes the proteins to unfold and spread out, trapping the air.  In science, foam is a mass of gas bubbles trapped in a matrix of molecules. You have to be careful not to touch your foam with your fingers or allow any fat from the egg yolk into your matrix or the proteins won’t unfold properly and it will take too long to form the foam. This experiment also works best on a bright dry day. In humid conditions, the water in the air will prevent the proteins trapping air.