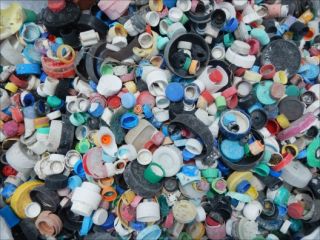 A collection of plastic garbage found in the Pacific Ocean.
(Image: © NOAA)

The search for any physical evidence of Malaysia Airlines Flight 370 continues, more than two weeks after the plane's disappearance.

Despite occasional reports that some debris has been spotted, nothing has yet turned up that satisfies officials who are combing the Indian Ocean for anything that could be a clue to the Boeing 777-200's whereabouts.

In addition to foul weather, administrative bungling and the vastness of the search area, the search for MH 370 has been compounded by one other factor: the incredible amount of garbage already floating in the search area — and in oceans worldwide. [Malaysia Flight 370: Facts & Timeline]

"Any search and rescue attempt will be hampered by untold quantities of debris," Charles Moore, a sailor and researcher at the Algalita Marine Research Institute in Long Beach, Calif., told The New York Times.

Moore is credited with being one of the first people to sound the alarm on the existence of the seas' "garbage patches," vast areas of floating garbage — most of it plastic — that he first saw in 1997 while crossing the Pacific Ocean.

"As I gazed from the deck at the surface of what ought to have been a pristine ocean, I was confronted, as far as the eye could see, with the sight of plastic," Moore wrote in a 2003 essay for Natural History magazine.

"It seemed unbelievable, but I never found a clear spot," Moore wrote. "In the week it took to cross … plastic debris was floating everywhere: bottles, bottle caps, wrappers, fragments."

Recent research has found that about 1,000 different microbes thrive on garbage patches. Many of the bacteria belong to the genus Vibrio (the same genus as the cholera bacteria), which is known to cause diseases in humans and animals. Other microbial members of the "plastisphere" seem to hasten the breakdown of the plastic.

Searchers looking for the debris field of MH370 are now searching an area known as the Indian Ocean Gyre, a region where there is little movement of the ocean's currents, which leads to the accumulation of floating garbage.

The isolated area is far from major shipping lanes and commercial flight paths, has few fishing boats and virtually no islands.

Worldwide, there are also dozens of other regions where, because of prevailing wind and ocean currents, garbage tends to accumulate. Because most of it is plastic, it resists decay and simply breaks down into smaller pieces, which can harm sea life when ingested.