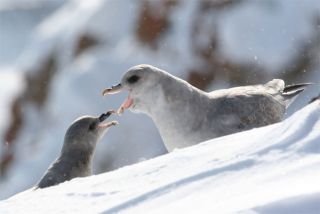 A pair of Northern fulmars in early May at their nest site at Cape Vera, Devon Island, Nunavut. The gull-like birds tend to breed in high-Arctic Canada and on islands in the Bering Sea.
(Image: © Mark Mallory.)

Plastic found in the stomachs of dead seabirds suggests the Pacific Ocean off the northwest coast of North America is more polluted than was realized.

The birds, called northern fulmars, feed exclusively at sea. Plastic remains in their stomachs for long periods. Researchers have for several decades examined stomach contents of fulmars, and in new study they tallied the plastic products in dead fulmars that had washed up on the coasts of Washington, Oregon and British Columbia, Canada.

The research revealed a "substantial increase in plastic pollution over the past four decades," the researchers said in a statement.

"Like the canary in the coal mine, northern fulmars are sentinels of plastic pollution in our oceans," said Stephanie Avery-Gomm, the study's lead author and a graduate student in University of British Columbia's Department of Zoology. "Their stomach content provides a 'snapshot' sample of plastic pollution from a large area of the northern Pacific Ocean."

Plastic products deteriorate slowly and several studies in recent years have shown vast amounts plastic and other trash in the Pacific Ocean. The garbage can be harmful to the entire ecosystem, scientists say.

The new study found that more than 90 percent of 67 fulmars had ingested plastics such as twine, Styrofoam and candy wrappers. An average of 36.8 pieces of plastic were found per bird. On average, the fraction of a gram in each bird would equate to a human packing 10 quarters in his stomach, the scientists figure. According to the Monterey Bay Aquarium, globally, up to 1 million seabirds and 100,000 marine mammals and sea turtles die each year from eating plastic. [Video of plastic-entangled sea lions]

"Despite the close proximity of the 'Great Pacific Garbage Patch,' an area of concentrated plastic pollution in the middle of the North Pacific gyre, plastic pollution has not been considered an issue of concern off our coast," Avery-Gomm said in a statement. "But we've found similar amounts and incident rates of plastic in beached northern fulmars here as those in the North Sea. This indicates it is an issue which warrants further study."

The findings, announced this week, are detailed online in the journal Marine Pollution Bulletin.