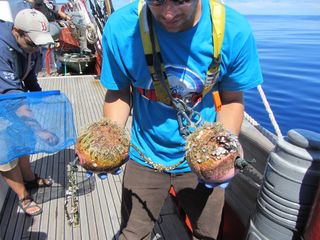 Scientist Greg Boyd reveals the invertebrates and microbial biofilms that have made a home on foam floats pulled from the ocean.
(Image: © Erik Zettler, SEA)

There's a secret world of microbes hidden on the plastic littering the oceans, and scientists are untangling how these mysterious microbial communities, dubbed the "plastisphere," are impacting the ocean ecosystem.

The ocean is teeming with trash, which collects in places in the ocean where currents can trap the debris, such as the great Pacific garbage patch, which is about the size of Texas. Researchers have found that seabirds often ingest this debris, but little was known about how sea debris affected the entire ocean ecosystem.

Last year, scientists discovered that about 1,000 microbes thrived on the plastic debris drifting in the oceans. Many of the bacteria belong to the genus Vibrio (the same genus as the cholera bacteria), which is known to cause diseases in humans and animals. Other microbial members of the plastisphere seemed to hasten the breakdown of the plastic. The microbes also look markedly different from ordinary marine microbes, the scientists said.

But the researchers didn't understand exactly how those microbes got on the plastic, or whether they were affecting the ocean ecology.

In follow-up research, scientists have found evidence that these microbes can form colonies on plastic in just a few minutes. In addition, some types of harmful bacteria tend to prefer living on plastic more than others do. [In Photos: Trash Litters Deep Seafloor]

As a follow-up, the researchers are trying to see whether fish ingesting the plastic could help these bizarre microbes thrive, by providing additional nutrients for the bacteria in their guts.

Unlocking the mysterious world of these microbes could help scientists understand the role of plastic in the ocean as a whole.

"One of the benefits of understanding the plastisphere right now and how it interacts with biota in general, is that we are better able to inform materials scientists on how to make better materials and, if they do get out to sea, have the lowest impact possible,” Tracy Mincer, an associate scientist at Woods Hole Oceanographic Institution in Woods Hole, Mass., said in a statement, referring to how the plastisphere interacts with other life in the oceans.

The findings were presented yesterday (Feb. 24) at the 2014 Ocean Sciences Meeting of the American Geophysical Union.