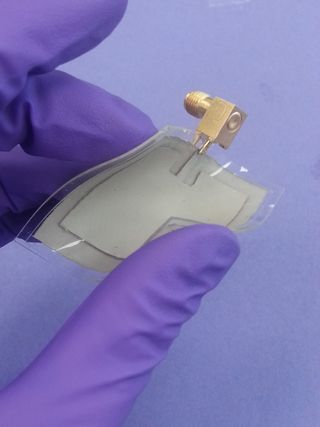 A new, flexible antenna that can stretch and bend with a person's movement could be used in wearable health monitoring devices, say the researchers who designed the device.

The device is flexible and wearable thanks to the use of silver nanowires — tiny structures that have previously been used to develop wearable sensors.

"Our antenna remains functional even when it is severely bent, twisted or stretched," said study author Dr. Yong Zhu, an associate professor of mechanical and aerospace engineering at North Carolina State University. "This is important for wearable applications because the wearable devices can be subject to a variety of deformation as the patients move around," he told Live Science.

Health monitoring systems can allow people to leave the hospital and still be monitored by their doctors, Zhu said. A number of wearable sensors have been developed to measure bioelectronic signals from patients, such as their temperature, hydration or body motion. And all these sensors need antennas to transmit the signals, he said.

"There was a clear need to develop antennas that can be easily incorporated," into wearable systems, "so that patients can be monitored or diagnosed," Zhu said in a statement. [Gallery: Futuristic 'Smart Textiles' Merge Fashion with Tech]

"Our technique is relatively simple, and can be integrated directly into the sensors themselves," Zhu said.

To create the antenna, the researchers applied silver nanowires over a stencil to make a specific pattern. Then they poured a liquid polymer over the nanowires. Once the polymer had set, it created a flexible material, with the nanowires embedded.

This flexible material, which is also highly conductive, forms the radiating element of the antenna.

"By manipulating the shape and dimensions of the radiating element, we can control the frequency at which the antenna sends and receives signals," Zhu said.

The antenna's frequency changes as the antenna is stretched, but the frequency still stays within a particular bandwidth, which means that it remains in communication with remote equipment, the researchers said. And the antenna goes back to its original shape and works after being deformed.

The next step for the researchers is to integrate bioelectronic signal-measuring sensors that they designed before with the antenna, to form a prototype remote health monitoring system, Zhu said.