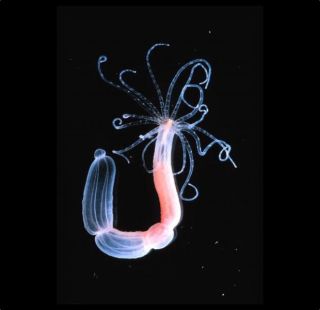 The sea anemone is a genetic oddball, with some traits similar to plants and others more closely resembling higher animals.
(Image: © Copyright Nature, 2005)

The sea anemone is an oddball: half-plant and half-animal, at least when it comes to its genetic code, new research suggests.

The sea creature's genes look more like those of animals, but the regulatory code that determines whether those genes are expressed resembles that in plants, according to a study published Tuesday (March 18) in the journal Genome Research.

"Since the sea anemone shows a complex landscape of gene regulatory elements similar to the fruit fly or other model animals, we believe that this principle of complex gene regulation was already present in the common ancestor of human, fly and sea anemone some 600 million years ago," Michaela Schwaiger, a researcher at the University of Vienna, said in a statement. [See Stunning Photos of Glowing Sea Creatures]

The size of an organism's genome doesn't correspond to how simple or complex that creature's body is, so some scientists hypothesized that more complicated links and networks between genes made for more sophisticated body plans.

Schwaiger and her colleagues at the University of Vienna analyzed the genome of the sea anemone, not only identifying genes that code for proteins, but also assessing snippets of code known as promoters and enhancers, which help turn the volume up or down on gene expression.

The team found the sea anemone's simple anatomy hides a complicated network of gene interactions, similar to those found in higher animals such as fruit flies and humans. That belies the notion that more complex gene networks always correlate with more elaborate body plans, and also suggests the evolution of this level of gene regulation happened before sea anemones, fruit flies and humans diverged, about 600 million years ago.

The team also found the sea anemone had a second level of regulation that closely resembles one found in plants. Genes are transcribed or copied by a RNA, which is then used as a recipe to build proteins. But tiny snippets of genetic material called microRNAs, which bind to the RNA copies, can stop the step of protein assembly.

While plants and animals have microRNAs, they look and act very different, so researchers had assumed they arose independently in the two kingdoms. Schwaiger and her colleagues found the microRNAs in the sea anemone have similarities to those found in both plants and animals.

That suggests these microRNAs probably evolved before plants and animals diverged long ago, and provides an evolutionary link between plant and animal microRNA.