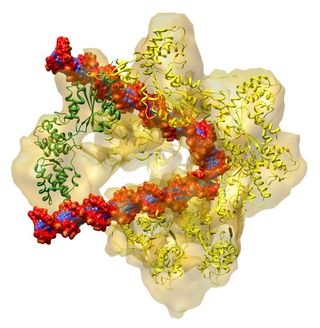 Before any cell can divide, it must copy its genetic material, which is packaged in a molecule called DNA, to make a second complete set of genes to pass on to its daughter cells. Eventually, the twisted, compacted double helix of DNA unwinds and separates its two strands. Each strand becomes a pattern, or template, for making a new strand.

Although this process is astonishingly fast and accurate, occasional mistakes can occur. These are usually corrected, but uncorrected mistakes are called mutations and can lead to diseases such as cancer and certain genetic disorders.

A thorough understanding of replication can inform the development of therapies for correcting related mistakes, so researchers are studying every step of the process. One team — made up of researchers at the U.S. Department of Energy's Brookhaven National Laboratory and Cold Spring Harbor Laboratory, both in New York — is focused on what happens at the very beginning of replication.

That process starts at defined DNA sites, so-called origins of replication. To find these areas of the genome, cells use a protein machine called the origin recognition complex, or ORC. The ORC’s job is easy in a typical bacterial genome, which only has one origin point. Its task is much more challenging in complex eukaryotic organisms, particularly humans, which have thousands of replication origins to copy their massive amounts of DNA .

To get a clearer picture of how the ORC works, the researchers made high-resolution images of an ORC from yeast — a model system for organisms with internal membrane-bound structures, called eukaryotes — as the molecule binds to DNA. They also made images of this complex bound to another protein that activates the entire structure. Combining the images produced a storyboard of the ORC in action.

In its simplest form, the ORC starts as crescent-shaped protein complex (yellow in the image above). It wraps around and bends the DNA (the red and blue complex). When the protein activator (green) joins the ORC, the ORC is ready to load the protein that will unwind the double-stranded DNA and enable other proteins to come in and copy it.

These new details about the early stages of DNA replication not only answer fundamental biological questions about how the process works, but also potentially explain how errors can lead to disease.