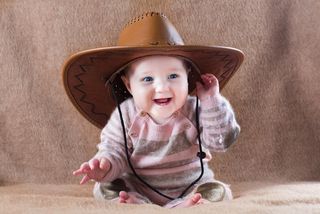 When picking a namesake for their kids, more parents are looking toward the gun cabinet.

Gun-related names are on the rise in the United States, according to an analysis by Laura Wattenberg, a baby-name expert and proprietor of the blog "Baby Name Wizard." More parents are picking names like Gunner and Colt for little boys, and even girls are getting in on the trend with names like Beretta and Kimber (a gun manufacturer).

The trend is primarily driven by the hunt for unique names, Wattenberg told Live Science. Parents are casting a wider net than the Johns and Jameses of the past, so more and more words are fair game to become names. But names based on other goods, such as cars or luxury designers, aren't rising as universally as gun names are, she said, suggesting something special might be going on.

Of course, playgrounds are not exactly brimming with little Berettas and Brownings quite yet. No gun-related names have cracked the top 10 most popular list; overall, the number of children given a name like Trigger or Wesson is small. To find out the popularity of these names, Wattenberg cross-checked a list of names of firearm manufacturers and terms against the U.S. Social Security database of baby names in 2012 compared with 2002. [Sophie's Secret: The 10 Most Popular Baby Names]

She came up with 15 gun-related names, each given to at least five babies in those two years: Barrett, Beretta, Browning, Cannon, Colt, Gauge, Gunner, Kimber, Magnum, Remington, Ruger, Savage, Shooter, Trigger and Wesson. And between 2002 and 2012, the popularity of those gun-related names took off.

"I was amazed at how strong and consistent the trend was," Wattenberg said. "Every single name had soared."

Not all parents who choose these names are motivated by guns, Wattenberg cautioned. Colt, which ranked as the 328th most popular boy's name in 2012, could also call to mind a horse or the Indianapolis Colts football team, for example.

Nevertheless, the joint rise of all these names is suggestive. One possibility for the popularity is that gun names provide a "macho" option for parents looking for unique names, as many new names, such as Madison, are androgynous, Wattenberg said.

Moreover, parents increasingly name their children based on their values, Wattenberg said.

"The parts of the country that have the highest rates of gun ownership tend to also be the most open to more creative names," she said.

Gun ownership across the country is down, but it's no surprise that parents who do own guns look to them for inspiration, said Cleveland Evans, a psychologist at Bellevue University in Nebraska who studies naming.

In an individualistic culture like the United States, "our self-concept tends to revolve more around ways in which we see ourselves as different from the other people around us, rather than similar," Evans told Live Science.

Thus, as fewer people own guns, those who do are likely to see gun ownership as more crucial to their self-concept, he said.

Notably, not every gun term gets to join the pantheon of baby names. Ruger, for example, sounds a lot like popular boy names Ryder and Riker, Evans said. On the other hand, nobody is naming their son after major ammunition manufacturer Nosler.

"It just doesn't sound right" as a name, Evans said.

Or as Wattenberg put it: "No matter how much you love your handgun, you're not going to name a child Glock."

It's hard to say how names like Browning and Ruger will be received. Research suggests that unusual or controversial names are a handicap when trying to get a resume looked at, Evans said. But in the real world, having a rare or unusual name doesn't seem to influence actual income, he said. What initial prejudice may exist appears easy to overcome.

Some gun-loving parents do seem to be considering the potential stigma of a gun-oriented name, however. Wattenberg searched through firearms message boards for discussions on naming and found many parents kicking around the name John Moses for a boy. John Moses was the given name of the firearms developer John Moses Browning, but only dedicated gun enthusiasts are likely to make that connection, Wattenberg said.

"Some parents are indulging their love for guns, but also trying to choose a name that will fit in more broadly," she said.