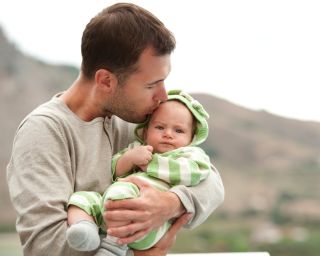 A father with his baby son.
(Image: © Nejron Photo, Shutterstock)

Dale Earnhardt Jr., was one. So was Martin Luther King Jr. And who could forget Harry Connick Jr.?

All of these men were named after their fathers — and it's perhaps no coincidence that all three were born in the South. New research suggests that patronyms, or juniors, IIIs and IVs, are more common in states with Southern-style "honor cultures."

Honor cultures are societies that place great stock in reputation. In such cultures, men are usually expected to be brave, strong and aggressive in defense of their families. Women are typically expected to be chaste and loyal. In the United States, southern and western states are strongly influenced by honor culture ethics, thanks to immigration by the Scotch-Irish, scientists say. Those ethics appear to extend to how people name their babies. [Sophia's Secret: The 10 Most Popular Baby Names]

"Sometimes culture plays a hidden or subtle role in the kinds of names we're attracted to," said study researcher Ryan Brown, a psychologist at the University of Oklahoma.

This history of an honor culture

The Scotch-Irish (or Scots-Irish, as they are sometimes known) came to the United States from the province of Ulster in Ireland, settling largely in Appalachia and the South. These immigrants hailed from a region long on economic insecurity and short on the authority of law. As a result, self-sufficiency, aggression against intruders and strong kin networks became the norm.

These norms still exist to a greater extent in regions where Scotch-Irish settlers made their homes, studies have found. These "honor states" include the South and much of the West, but not the Northeast, Midwest and Middle Atlantic states or Alaska and Hawaii. Honor states have higher rates of homicides arising from arguments, suicides, risk-taking and accidental deaths, all of which hint at honor culture ideals of bellicose masculinity.

Brown has long studied honor cultures, but he got curious about how honor state residents might name their children when one of his collaborators was hunting for a name for his newborn daughter.

Honor culture ethics might reinforce the practice of naming children after their fathers, Brown and his colleagues reasoned. A Dale Earnhardt Jr. (or even a Dale Earnhardt III) would remind others of his father's reputation — and reputation is taken very seriously in honor cultures. [History's 12 Most Doting Dads]

The Scotch-Irish also had particular naming traditions, Brown told LiveScience. Firstborn sons would be named after their grandfathers, and any subsequent sons would receive variations on their father's name.

To find out whether Scotch-Irish naming traditions still influence modern parents, Brown and his colleagues first surveyed 527 University of Oklahoma undergraduates. The students filled out a survey revealing their honor culture attitudes, such as whether a man has the right to react with aggression if someone insults his mother. Next, the researchers asked their participants to imagine having a child in the next five years. The participants had to rate how likely they'd be to name the baby after male or female relatives in the family.

The more a man believed in honor culture ideals, the more likely he was to say he'd name his child after himself, his father or his grandfather. The same was not true of women, likely because they'd want to consider their partner's name, an unknown in this hypothetical situation. Honor ideals were not linked to the desire to name a child after a mother or grandmother, suggesting this is a patriarchal phenomenon.

In fact, a follow-up analysis indicated just that: Men who endorsed honor culture ideals also held patriarchal values, such as the belief that mothers shouldn't work outside the home. These patriarchal values explained the interest in patronyms.

But the researchers wanted more than just hypotheticals to back up their baby name findings. So they turned to the U.S. Social Security name database and gleaned the top 10 most popular names for boys and girls in each state in 1960, 1984 and 2008. These dates, 24 years apart, were chosen to approximate a generation apiece. If people in honor states really prefer patronyms more so than people in nonhonor states, there should be more repeated names among these three years in those states.

And so there were. After controlling for demographic factors such as diversity, religion and the concentration of urban areas, the researchers found more Jrs., IIIs and IVs in honor states.

"You don't see that with girls names," Brown said. "I suspect the reason for that is in honor cultures especially there is a really big emphasis on masculinity and masculine strength."

To rule out the possibility that people in honor states are simply less creative at coming up with names, the researchers determined the percentage of kids given one of the top 10 names in each year. They found that honor states are actually more creative namers than nonhonor states: Kids in honor states have a wider variety of names, which suggests the name repetition across generations is more due to patrilineal naming. This analysis backs up previous research that has found more creative baby naming in frontier states as opposed to New England.

Finally, the researchers decided to find out whether boosting someone's feelings of honor would lead them to prefer patronyms. They asked 137 undergraduates to read a fake news story about a terrorist attack on the Statue of Liberty, a place of national honor. Shortly afterward, the students completed a survey about their naming preferences. Sure enough, thinking about an attack on Lady Liberty increased men's interest in naming their child after themselves. (Again, women did not show the effect.)

An analysis of baby names the two years before and after the terrorist attacks of Sept. 11, 2001, suggests this honor reaction occurs in the real world: There were more repeated boy names from previous generations after the attacks than before. [10 Ways the 9/11 Attacks Changed America]

The research has some limitations, including the inability to track naming traditions directly through individual families. The Social Security database tracks only first names, but the college student studies suggest the patrilineal naming trend extends to middle names, Brown said.

And future studies should better define honor states versus nonhonor states, Brown and his colleagues wrote online Nov. 7 in the journal Personality and Social Psychology Bulletin. But taken together, the observations and experiments seem to suggest that honor ideals exert surprising influence.

In the course of his research, Brown learned that his own family heritage is from southern Scotland. What's more, the patrilineal naming pattern persists in his family: Brown is named after his grandfather, and he's given his sons male family names, too.

"I wasn't even aware of this pattern and I ended up following it," Brown said. "It just seemed like the right thing and I think that's how culture works." Cultural traditions aren't always passed down consciously, he said — sometimes they just "feel right."

You don't even have to be Scotch-Irish to absorb their influence, Brown added. The group was like a "dominant gene" everywhere they moved.

"When they moved here into the Appalachians and down to the South, they really just culturally dominated everything," he said. "People just adopted their norms."