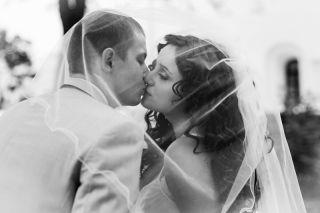 Will she be Mrs. HisLastName?
(Image: © Olga Vladimirova, Shutterstock)

As a girl, Andrea Grimes assumed that she would take her husband's last name when she grew up and got married. But at 27 and newly engaged, the Dallas journalist and feminist blogger now has no interest in switching her surname.

But not everyone has caught up: Both Grimes' mother and her fiancé's stepmother have already referred to her with her fiancé's last name. Those assumptions aren't surprising, given that decades after the feminist revolution, most women still take their husband's last name upon marriage. While no national statistics exist, some recent studies suggest that women keeping their own name is actually becoming less popular. And a recent nationally representative survey found that half of Americans support women being legally required to take their husband's name upon marriage. These traditional attitudes persist even as divorce, remarriage, gay marriage and blended families make naming more complex.

"It's not unlike other sorts of signals of traditionalism," said study researcher Brian Powell, who along with his colleagues reported the results of that survey in the journal Gender and Society in April 2011.

"Wedding services today still have so many markings of the traditional gender divide," Powell, a sociologist at Indiana University, Bloomington, told LiveScience. "The symbolic aspects of gender are still very powerful." [10 Wedding Traditions from Around the World]

For Grimes, who blogs at hayladies.wordpress.com, the decision to keep her name was both personal and political.

Grimes' resolve to keep her name was only strengthened when she learned of the cultural baggage behind the decision. Throughout most of the 1800s and into the 1900s, U.S. common law abided by the doctrine of coverture. Under coverture, a married woman had no rights to her own property or to make contracts in her own name — and indeed, she had no right to her own name at all. Her husband took on all legal rights for the couple.

Coverture didn't fully fade from the U.S. legal system until the 1960s and ‘70s; remnants included laws in some states forbidding women from taking out their own lines of credit. For Grimes, the symbolism still remains.

"It's just totally gross to me," she said. "It doesn't fit in with my concept of what modern marriage is. My marriage, I hope, is between a couple of people that love each other and want to be activity partners forever and ever. … I don't understand why one partner has to effectively give up their identity."

Other women see the naming debate in a different light. For Laura Wattenberg, who runs the website and blog babynamewizard.com, changing her name at marriage wasn't a bow to traditionalism or a passive acceptance of her husband's name. It was an active choice.

Surname decisions are now a free choice, but statistics suggest that most couples still take the traditional road. A 2009 study published in the journal Social Behavior and Personality examined New York Times wedding announcements from 1971 to 2005, and found that the number of brides keeping their surname was about 1 percent in the 1980s, rising to 9 percent in the 1980s and 23 percent in the 1990s, before declining slightly to 18 percent in the 2000s. Brides with more education or a high-powered occupation were more likely to keep their names, as were older brides.

Another study, this one published in March 2011 in the journal Names: A journal of Onomastics, likewise used New York Times wedding announcements and found that women who had Catholic wedding ceremonies were least likely to keep their names, followed by Protestant and then Jewish women. Women who had non-religious civil ceremonies were most likely to keep their names, with 55.9 percent doing so.

Regardless of which side you come down on, the push and pull of identity is at the core of the naming debate, according to Powell. He and his colleagues surveyed a nationally representative sample of 815 Americans, asking them not only yes-and-no questions about name-change choices, but also why they felt the way they did.

As for people's reasons for advocating that women change their names, family identity was a reoccurring theme, Powell said.

"One key theme was this idea that marriage is about shifting your identity from an individual identity to a collective or family identity," Powell said. "What they don't explain is why it is that women should change their names as opposed to men, or both the husband and wife shifting [to a new name]."

Some people cited the importance of having the same name for the couple's children, while others said tradition or convenience made women changing their names the best option. Several harkened back to the traditions of coverture, with one person responding, "Women should change their names so there's a connection there, just a connection to let you know that she belongs to him."

Among the 30 percent of people who didn't think that women should change their name, their reasoning was rooted in another type of identity: personal identity. Like Grimes, many people think of their name as core to their identity, Powell said, and associate name changes with a loss of identity.

"Other people spoke about it in professional terms, that it is important to maintain one's name, professionally speaking," Powell said.

When the researchers asked their participants how they felt about men changing their names, 50 percent said that a man taking his wife's name would be okay. But that response rate didn't seem to reflect much gender liberation based on how the participants answered the question, Powell said.

"They were incredulous," Powell said of the respondents' responses. "They would laugh at it. One quote was, 'Sure, if he wants to be a woman.'" [Read: Busted! Gender Myths in the Bedroom & Beyond]

The groom is changing his name

Men changing their names at marriage, whether to create a new surname with their wife or to take her name, is still incredibly rare, Powell said.

Barry Chalfin Lenair is one of the few men who did decide to take his wife's last name, making the change about seven years after their 1999 marriage. Lenair met his future wife, who works as a spiritual healer in Vermont and Massachusetts, in 1992 and was smitten, he said, by both her and the work that she was doing.

Lenair's decision to take her name after they got married was likewise driven by his love for her and for their work, he told LiveScience.

"I realized that it was an important thing to do for me, and for the work, and for the people who used to call me Mr. Lenair anyway," he said. "I don't regret it for a second."

Lenair retained his "maiden name," as he called it, as his middle name. He said he has never gotten any negative responses to his name-change decision, but for women like Grimes, the fact that so few men make Lenair's choice is evidence that the choice is not as free as it seems.

"If the fight was over, your husband would be clamoring to take your name, and husbands are not clamoring to do that," Grimes said. "That to me is a great illustration of why it is important for women to keep their names or to make new names."

Complicating the issue is that traditional naming conventions don't always work well in modern families, where divorce and remarriage are common. Los Angeles publicist Tracy Bagatelle-Black didn't want to lose her distinctive maiden name of Bagatelle for professional reasons, so when she got married, she told her husband that she would hyphenate. For reasons she still doesn't understand, her husband decided to hyphenate right along with her, and they both became Bagatelle-Black.

When their children were born, however, Bagatelle-Black's husband insisted the kids take the surname Black. Later, the couple divorced. Bagatelle-Black had since become known under her hyphenated name and even built her business logo, a black-and-white checkered design, around her new name. So she kept it, even as her now ex-husband swiftly returned to just "Black." His new wife dropped her surname, the one she shared with her kids from a previous marriage, to also take the "Black" surname name when they married.

"The more complicated the family is, the more complicated the name situation is going to be, it's as simple as that," Wattenberg said. In some cases of divorce and remarriage, she said, a woman can end up holding on to a name from a previous marriage that's different from her new husband's, their children's and even her own parents'.

If blended families have no tradition to fall back on, neither do the newest entrants into the marriage arena, gay couples. As several states have legalized gay marriage, social scientists are waiting to see whether any name-choice trends emerge.

"For gay couples, this is going to be a really interesting question," Powell said. "How many gay and lesbian couples are going to keep their names or take their spouses' names? Does same-sex marriage lead to same-sex couples following the traditional pattern?"