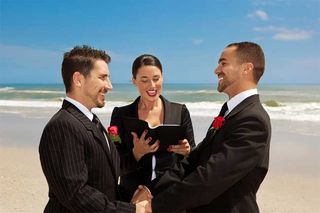 In the late 1700s, something disturbing happened to marriage in Western societies: It began to change. Young people had revolutionary new ideas about the institution and what it meant to them.

"People were terrified," said Stephanie Coontz, a historian at The Evergreen State College in Washington and author of "Marriage, A History" (Viking Adult, 2005). "Social conservatives of the day said, 'Oh my gosh, you're going to have the wrong people getting married.'"

The radical idea that had everyone so worried? The notion that people should marry for love, rather than for individual power, group survival, or any of a host of other historic reasons to bond. [Read: Majority in US Back Same-Sex Marriage, Poll Finds]

Marriage survived, and so did society. But the fight over marriage continues, most recently with the judicial decision in California that ruled Proposition 8, a state ban on gay marriage, unconstitutional. On Thursday, Federal Judge Vaughn Walker lifted the stay on his earlier ruling, clearing the way for same-sex marriages in California to go forward beginning Aug. 18, pending a reversal by the 9th U.S. Circuit Court of Appeals.

The case is likely on its way to the Supreme Court, but this latest victory for advocates of marriage rights for gay couples may be a natural next step in the long and emotional evolution of marriage, say historians. The ruling has already sparked anger in opponents of gay marriage, an anger that may be linked with fear of social change in general.

"I think a lot of the opposition comes from people who are looking at all these changes, and they are disruptive, unsettling changes," Coontz said. "People are frightened by the idea that there are no strict roles. … Same-sex marriage has become a stand-in for all the other things that make them anxious about contemporary marriage."

Marriage has never been quite as simple as one man, one woman and a desire to procreate. Across cultures, family structure varies drastically. Early Christians in the Middle East and Europe favored monogamy without divorce. Some Native American tribes practiced polygamy; others, monogamy with the option to dissolve the union. In some African and Asian societies, Coontz said, same-sex marriages, though not seen as sexual, were permitted if one of the partners took on the social role of the opposite gender.

Inuit people in the Arctic formed co-marriages in which two husband-wife couples could trade partners, an arrangement that fostered peace between clans. In some South American tribes, a pregnant woman could take lovers, all of whom were considered responsible for her child. According to "Cultures of Multiple Fathers: The Theory and Practice of Partible Paternity in Lowland South America" (University of Florida Press, 2002), 80 percent of children with multiple "fathers" survived to adulthood, compared with 64 percent of kids with just one dad.

Increasing globalization has erased many of these traditions, but some persist. In America, Mormon splinter groups practice polygamy. In Hui'an China up until the 1990s, many married women lived with their parents until the birth of their first child. And in the Lahaul Valley of India, women practiced polyandry until the most recent generation, marrying not just one man, but all of his brothers as well. The tradition kept small land holdings in the hands of one family and prevented overpopulation in the remote valley.

For much of human history, marriage was a way to spread resources between families, Coontz said. When societies develop into the haves and the have-nots, marriage usually changes, becoming a way to hold on to power and land ¾ thus the predilection toward incest in royal families across the globe.

But the first drastic redefinition of marriage in the Western world came from early Christians, Coontz said. At the time, a man could divorce his wife if she failed to bear children. Early Christians disavowed the practice. God had joined the couple together, they said, and a lack of offspring was no excuse to dissolve that bond.

This was "unprecedented," Coontz said. "It was actually Christianity that first took the position that the validity of marriage did not depend on the ability to reproduce."

It took hundreds of years for the Church to enforce this pronouncement, and even then, local parishes would often find reasons to let divorce slide. As it stood, the early Christians weren't sold on marriage, anyway. Saint Paul famously said that celibacy was the best path, but grudgingly added, according to the King James Version of the Bible, "If they cannot contain, let them marry: for it is better to marry than to burn."

Still, marriage was not a matter of love. Too much affection in a marriage was seen as a distraction from God. In the Middle Ages, people went so far as to argue that love in marriage was impossible. The only way to true romance, they said, was adultery.

The disconnect between love and marriage wouldn't change until the late 1700s, when Enlightenment thinkers argued that the older generation had no business telling the younger generation who to marry. From there, things snowballed relatively rapidly: In the early 1900s, sexual satisfaction became a criterion for marriage. Then, in the 1960s and 1970s, people began to question the laws that made men the legal overlords of their wives. Suddenly, the idea that marriage was a partnership between two people with different gender roles began to dissolve.

"My argument would be that it was heterosexuals who revolutionized marriage to the point where gays and lesbians began to say, 'Oh, this applies to us now,'" Coontz said. "First love, then sexual attraction, and then, finally and not until the 1970s, the idea that marriage could be gender-neutral."

With every change comes controversy, Coontz said. People sniffed at the idea of marrying for love, frowned upon the sexually liberated flappers of the 1920s, and fought against the Women's Liberation movement of the 1970s.

Some of those ideological debates still echo in today's debate over same-sex marriage, but research shows that there is no scientific reason to deny marriage rights to gays, said Sharon Rotosky, a psychologist at the University of Kentucky. A June 2008 study, published in the journal Pediatrics, found that children with lesbian parents actually did better on many measures than children of straight parents. Other studies have shown very similar outcomes between kids with gay parents and kids with straight parents.

Rotosky has found that even putting marriage rights up for debate harms gay and lesbian individuals. In a 2006 study, she and her colleagues surveyed people living in U.S. states with anti-gay-marriage amendments on the ballot and compared the results with states without such an amendment.

"We found that LGB [lesbian, gay and bisexual] people who lived and stayed where there was an amendment on the ballot were more stressed and saw more negative messages in the media," Rotosky said. "Marriage amendments do increase stress and do increase depressive symptoms."

The Proposition 8 case could be decided by the Supreme Court within two years, which could mean more stress ahead for gay and lesbian couples. But, said Rotosky, the outcome could be worth it.

"[Extending marriage rights] wouldn't end discrimination," she said. "But it would help relieve the chronic form of stress that couples have to endure every day."