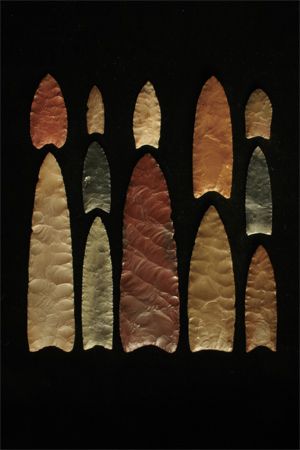 Clovis points from various sites in North America.
(Image: © Center for the Study of the First Americans/Texas A&M University)

The Clovis People, a prehistoric group of mastodon hunters distinguished by their unique spear points and once thought to be the first Americans, likely populated North America after other humans had already arrived, a new study concludes.

The Clovis and their hunting technologies were not the first inhabitants of the New World, researchers write in the Feb. 23 issue of the journal Science, addressing a longstanding debate on the first New World humans.

The people were named for artifacts found at Clovis, New Mexico, but evidence for this culture has since been found elsewhere.

The "Clovis-First" model purports that the Clovis people trekked across the Bering land bridge from Siberia to Alaska and then followed an ice-free corridor between two Canadian ice sheets, reaching North America some 11,500 years ago. From there, the people were thought to have spread throughout the continent and down to the tip of South America.

“For decades, archaeologists have been chipping away at the Clovis-First model,” said lead scientist Michael Waters, director of the Center for the Study of the First Americans at Texas A&M University. Most of the whittling came from studies in which material excavated from older sites showed evidence for people in the Americas before Clovis.

Waters and Thomas Stafford of Stafford Research Laboratories in Colorado used a radiocarbon method to re-date artifacts dug up at more than 25 Clovis culture sites in North America. Past age estimates of Clovis material relied on a suite of methods, most of which have since advanced in precision and accuracy.

The new results reveal that Clovis spear points [image] and other tool technologies appeared in the New World 13,100 years ago and trailed off about 12,900 years ago. They reported the dates as 11,050 to 10,800 radiocarbon years ago, but radiocarbon dates don’t match up one-to-one with calendar years. They are longer.

So the Waters and Stafford dates suggest the Clovis arrived about 400 years later than once thought. Also, in archaeological time, the Clovis culture seemed to have lasted just 200 years, not enough time for the group to journey from northeast Asia through the Americas.

Waters puts forth a new model for how the first people populated the New World and it more than rules out the Clovis people as trend-setting firsts.

“What we now need to do is recognize the fact that Clovis is not first, and move on and start developing a new model for the peopling of the Americas,” Waters told LiveScience.