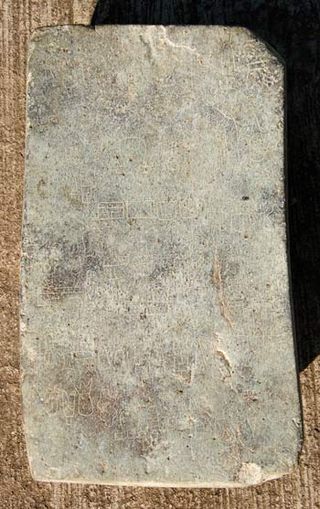 The Cascajal block from Veracruz, Mexico is apparently inscribed with a previously unknown Olmec writing may be the oldest text in the New World.
(Image: © Stephen Houston)

A stone block from Mexico thousands of years old apparently inscribed with a previously unknown writing may be the oldest text in the New World, an international team of archaeologists said today.

This find lights the hope of future discoveries of written records detailing the Olmecs, the likely creators of the block and the ancient civilization that in many respects was the progenitor of all later complex societies in Mesoamerica, such as the Maya and the Aztecs.

"This reveals the Olmecs, in many ways the first civilization in a vast part of the ancient Americas, were literate, which we did not know for sure before, and hints that they were capable of the same large-scale organization assisted by writing like you saw in early Mesopotamia or Egypt," researcher Stephen Houston, an archaeologist at Brown University in Providence, R.I., told LiveScience.

"It ratchets up what we might find about them in terms of all the concepts that can be recorded in written form, like rituals and economics and politics, sequences of kings," he added. "And it suggests the groups that followed that we knew were literate may not have developed writing on their own."

The stone [image] was discovered at a site named Cascajal by Mexican archaeologists Carmen Rodríguez and Ponciano Ortíz in 1999. It was taken from debris excavated out of a gravel quarry in the Mexican state Veracruz. This area was the former heartland of the Olmecs.

"It's a fantastically lush area, really quite beautiful, and very productive, where corn and other crops are grown without irrigation," Houston said. "One can understand why it was a population center in ancient times. People could live there fairly easily and fairly well."

Surrounding the Cascajal block were ceramic sherds, fragments of clay figurines and broken stone artifacts. Based on their design, the researchers dated the slab back to 3,100 years or before, at least 400 years before writing was thought to have first appeared in the Americas.

Carved of the mineral serpentine, the block weighs about 26 pounds and measures roughly 14 inches long, eight inches wide and 5 inches thick. The stone is not especially hard, and the researchers find evidence on the block that had been carved repeatedly and erased.

"That's strikingly odd, like nothing I've ever seen before," Houston said.

The front of the Cascajal block contains 28 distinct signs [illustration], of which some are repeated up to four times, for a total of 62 glyphs on the slab. These resemble insects, corn, mollusks, beads, dart tips, eyes, thrones and other symbols of Olmec life and seem to be arranged into a number of sentences.

Several signs are often paired together on the slab, such as eyes. Also paired are thrones with mats, both of which are common symbols of rulership in Mesoamerica. The researchers say these pairings could make up poetic couplets, making them the earliest known examples of poetry in Mesoamerica.

No one yet knows what the writing on the Cascajal block actually says. The researchers hope one day excavations will turn up the equivalent of a Rosetta stone, an artifact that bears both Olmec writing and translations in one or more known languages.

The reason archaeologists have not found other examples of Olmec writing could be that other texts were inscribed in wood and did not survive. Houston also suggested Olmec writing might not have been recognized as such until now.

"My colleagues and I have recently found a small baked ceramic figurine of a person, down the back of which are almost certainly other examples of the script we found on the Cascajal block that we would not have recognized before its discovery," Houston said.

The findings are detailed in the Sept. 15 issue of the journal Science.