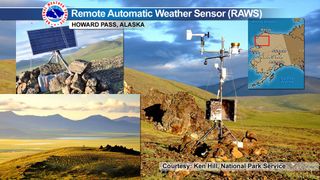 Gusting winds blew away Alaska's wind chill record on Valentine's Day (Feb. 14), setting a new low of minus 97 degrees Fahrenheit (minus 71 degrees Celsius). A remotely-operated National Weather Service sensor in Howards Pass, in northern Alaska's Brooks Range, recorded sustained winds of 71 mph (114 km/h) and gusts up to 78 mph (125 km/h) on Friday. The wind chill was calculated from the recorded temperature of minus 42 F (minus 41 C).

Wind chill is a measure of heat loss from the human body, and reflects how outdoor conditions actually feel to people braving the winter weather. Frostbite can strike in less than 5 minutes if skin is exposed in conditions like those in Howards Pass, the Alaska NWS said.

Alaska's previous wind chill record of minus 96 F (minus 71 C) was set at Prudhoe Bay on Jan. 28, 1989. Prudhoe Bay is a coastal town where oil workers process oil and gas extracted from Arctic Alaska's oil fields. Howard Pass is uninhabited and sits at 2,062 feet above sea level (628 meters), according to the Alaska National Weather Service.

Both records were computed using the weather service's "new" formula for wind chill, which was rolled out in 2001. The new formula makes wind chill temperatures warmer than pre-2001 records. For example, the Prudhoe Bay record wind chill occurred with an air temperature of minus 56 F (minus 49 C) and a wind from the west-southwest at 21 mph (34 km/h) gusting to 30 mph (48 km/h), the Alaska NWS said on Facebook. According to the 'old' formula, the Prudhoe Bay record would have registered minus 120 F (minus 84 C).