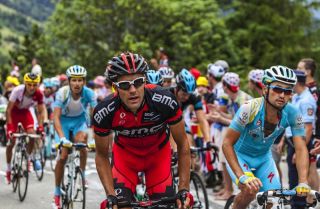 The Tour de France is a bike race, not a beauty contest. But winners tend to be hotter than losers, new research finds.

The link between sexiness and cycling success hints that male attractiveness might signal evolutionary fitness, researchers report today (Feb. 4) in the journal Biology Letters. Women may clue into some facet of male hotness as an evolutionary remnant of the days when long-distance hunting and gathering meant the difference between life and death, said study researcher Erik Postma, an evolutionary biologist at the Institute of Evolutionary Biology and Environmental Studies at the University of Zürich.

"If a woman chooses a man with high endurance, she can be sure he will bring home plenty of food for herself and her children," Postma told Live Science.

In the animal kingdom at large, it's clear that females choose males for their sexy accessories. Female deer like big antlers; birds like long or colorful tails.

"In our own species, it's much less clear why we find some faces more attractive than others," Postma said. "What does attractiveness actually signal in humans?"

Evolutionary biologists and psychologists have tested theories that attractiveness correlates to strength and coordination, with mixed results. Pulling men from the general population to test these ideas is tricky, Postma said, because they may not be particularly motivated, and differences in diet or exercise routines may mask their natural abilities.

No one had ever tested endurance, because dragging volunteers into the lab and forcing them to run miles on end is unlikely to go over well, he said. But in professional cyclists, researchers had a group of similarly aged men with similar motivation and training regimens.

The Tour de France bike race takes competitors over 2,000 miles (3,200 kilometers) of mountainous roads over 23 days, which approximates the kind of aerobic exertion an early hunter-gatherer would have to perform, day in and day out, Postma said.

Postma recruited 816 participants, 72 percent of them female, to look at images of the 80 competitors in the 2012 Tour de France and rate the men's attractiveness. Because people usually perceive famous people as more attractive than ordinary schlubs, Postma excluded ratings if the participant indicated they recognized the cyclist (this happened about 1 percent of the time).

Next, Postma compared the hotness ratings to the cyclists' performances, as measured by the time it took each to complete the race's prologue, two time trials and the rest of the race. (He picked this method over simply looking at the final finishing times, because team tactics influence an individual's final standings.) And the results showed a link: More attractive athletes tended to perform better in the Tour de France.

The correlation wasn't perfect. In fact, the cyclist ranked as hottest, France's Amaël Moinard, who got a score of 4.2 out of 5 on the attractiveness scale, finished 42nd out of 80 in Postma's standings. American Tejay van Garderen ranked 17th in attractiveness and performed best.

But, overall, the pattern held, Postma said. "If you were to take the 10 percent best-performing riders and compare their attractiveness to the 10 percent of riders that performed least well, the top 10 percent is about 25 percent more attractive than the lowest 10 percent," he said.

"This preference might be sort of an evolutionary relicof our past," he added.

The findings suggest that something in the riders' faces hints at their endurance abilities. Cycling, of course, is notorious for doping scandals. But such use of performance-enhancing drugs, Postma said, would only weaken the hotness-performance link by allowing the more homely to cheat. Thus, he said, he'd expect the results to be even stronger if no one doped.

Postma would like to conduct the study on other groups of athletes, including sprinters, who need speed and strength, but not endurance.