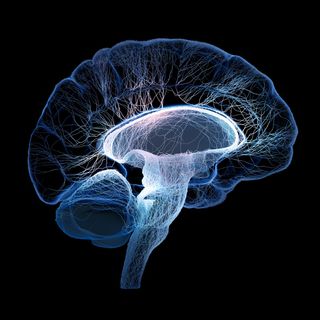 Scientists have identified a part of the brain that seems to be unique to humans.

The brain region, called the lateral frontal pole prefrontal cortex, was described today (Jan. 28) in the journal Neuron, and is linked to higher thinking processes.

"We tend to think that being able to plan into the future, be flexible in our approach and learn from others are things that are particularly impressive about humans," Matthew Rushworth, an experimental psychologist at Oxford University, said in a statement. "We've identified an area of the brain that appears to be uniquely human, and is likely to have something to do with these cognitive powers,"

The new brain region is located within a larger region called the ventrolateral frontal cortex, which in past studies has been tied to higher thinking. For instance, this part of the brain houses Broca's region, which plays a critical role in language. Differences in the ventrolateral frontal cortex have also been tied to psychiatric disorders such as compulsive behavior disorders and attention deficit hyperactivity disorder (ADHD).

Rushworth and his colleagues put 25 people who were each 20 years old into a magnetic resonance imaging (MRI) scanner. The research team next mapped connections among different regions of the ventrolateral frontal cortex, then divided the brain region into 12 areas that seemed to be constant across all participants.

The researchers then compared the mapped region to the same brain region in 25 rhesus macaque monkeys, who had also undergone MRI scans.

The monkey brains were strikingly similar to human brains in 11 out of 12 of the areas identified. But one area, called the lateral frontal pole prefrontal cortex, was found only in the human volunteers.

In addition, the whole ventrolateral frontal cortex was more connected to auditory parts of the brain in humans, perhaps to facilitate better language processing.

"We have established an area in human frontal cortex which does not seem to have an equivalent in the monkey at all," said study co-author Franz-Xaver Neubert of Oxford University, in a statement. "This area has been identified with strategic planning and decision making, as well as 'multi-tasking.'"