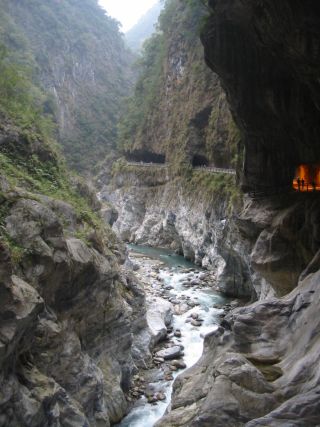 Rivers may seem steady and predictable, but it turns out that they may be a little wilder than scientists once thought.

Instead of evenly eating through rock for millions of years, inching downward at a constant rate, rivers erode rock at different speeds through time, reports a study published Jan. 16 in the journal Nature.

Because geoscientists rely on river erosion to track both mountain-building and the warming and cooling of Earth's atmosphere, the discovery means researchers may need to rethink how they calibrate their river clocks.

"River incision is the yardstick we use to measure a lot of processes," said Noah Finnegan, lead study author and a geomorphologist at the University of California, Santa Cruz. "There were a lot of reasons to think these things were in equilibrium, but you can't simply take a rate and tell a story with that rate.

For example, rivers eroding rock, such as the rushing courses that carve deep gorges in mountains, often leave traces like terraces. Terraces are abandoned riverbeds, left high and dry above where water now flows. Measuring the age of terraces can reveal how quickly a river cut its canyon. If the mountains were growing at the same time the river cut down, then geologists can start to estimate what's called an uplift rate — how fast mountains grow — by assuming that river erosion keeps pace with the rising range. [The World's Tallest Mountains]

But Finnegan, who studies the evolution of Earth's surfaces through time, wondered what would have happened if erosion had started and stopped over the millennia. "When you look at how rivers really work, they're really messy," Finnegan told LiveScience's OurAmazingPlanet. For instance, floods or landslides can dump massive amounts of sediment in a riverbed, burying the river bottom and temporarily halting erosion.

To test his suspicions, Finnegan assembled a global database of thousands of river erosion rates. The database confirms reality is as messy as Finnegan suspected.

River erosion is governed by the same statistics that describe random processes such as coin flips or the stock market. In the short term, an erosion rate can be really fast or really slow, the study reports. But if rivers grind down rock for a long time — million of years — that erosion rate averages out and slows down.

"If you're flipping a coin, you may get 17 heads in a row," Finnegan explained. "But the longer you wait, the more likely you are to get a longer rate — something that's really average in terms of behavior."

Finnegan's discovery may also mean there is a problem with the speed up in river erosion rates seen in the past 2.6 million years, since the end of the Pleistocene period. Floods aren't the only way a river's erosion rate changes — climate shifts can also add or remove sediment or water to a river, changing its ability to erode rock. Since the Pleistocene period, "there are many examples where people have noted the rate of incision tends to increase toward the present, and people have said this is because of recent climate change," Finnegan said. The Pleistocene marks the end of Earth's last big ice age.

But Finnegan's database reveals why this link between river erosion and climate could be biased. Just like the stock market has booms and busts over time, so does erosion. So the speed-up since the Pleistocene may not be due to climate change, but simply a quirk of statistics.

"I don't want to be in the position of telling anyone they're wrong, but this is a null hypothesis that should be considered," Finnegan said. (A null hypothesis is the possibility that the results of a test or analysis are the result of random, chance events.)

Geologists have long noted a similar statistical bias in the sedimentary record, said Roman DiBiase, a geomorphologist at Caltech who was not involved in the study. Sedimentary rocks — those made from sand, clay, pebbles and other sediments — also have varying deposition rates, such as differences between summer and winter in an Arctic lake.

"This study highlights the importance of understanding not just the mechanics of river incision into bedrock, but also the magnitude and frequency of events that deposit material into rivers and protect the riverbed from erosion," DiBiase told LiveScience's OurAmazingPlanet. "Future work studying the processes that control erosion and deposition should enable this bias to be corrected for."