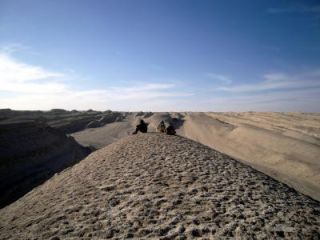 What could have been? Researchers sit atop a wind-formed ridge in Central Asia.
(Image: © Paul Kapp, University of Arizona.)

The planet huffed and puffed and blew away rock that could have formed mighty mountains, according to new research.

Bedrock in Central Asia that would have formed mountains over the past 3 million years was sandblasted into dust instead, suggesting that winds may be much more powerful in the evolution of mountains than previously thought, said Paul Kapp, a geologist at the University of Arizona in Tucson. As this dust was blown away, a weight was lifted off the bedrock, speeding its crumbling.

"No one had ever thought that wind could be this effective," Kapp said. "You won't read in a textbook that wind is a major process in terms of breaking down rock material."

Wind can be just as powerful as rivers and glaciers — the textbook examples of forces that wear down mountains and shape their evolution — Kapp said.

Kapp and his team discovered wind's rock-sculpting abilities by studying huge wind-formed ridges of rock in Central Asia's Qaidam Basin. Fields of these ridges, called yardangs, look like corduroy from space. Wind had scoured long gouges out of the Qaidam Basin bedrock during glacial periods, leaving the ridges behind. Kapp and his team found the missing material on a nearby plateau.

"What we're proposing is that during the glacials [periods when glaciers advance], when it's colder and drier, there's severe wind erosion in the Qaidam basin and the dust gets blown out and deposited downwind in the Loess Plateau," Kapp said. "Loess" is a word for wind-blown silt deposits.

The scientists used a computer model to show that dust from the basin could have formed the plateau. During the last Ice Age, which ended 11,000 years ago, the winds blew from the Gobi Desert toward the Loess Plateau. During glacial periods, the winds blew from the Qaidam Basin toward the Loess Plateau. (The wind is not having such effects now because the climate is different, Kapp said.)

The team suggests wind erosion also sped the bedrock folding in the basin, which folds and crumples as the Indian plate collides with the Asian plate.

"The folding accelerated 3 million years ago," Kapp said. "That's when the wind erosion turned on. I don't think it's a coincidence."

When the winds whisked sediment out of the basin during the glacial periods, the bedrock deformed faster because it was no longer weighed down by all the sediment, a process Knapp called "wind-enhanced tectonics."

The study is detailed in the April/May edition of the journal Geological Society of America Today.