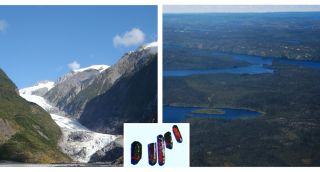 A chronological record of the transition between the formation and growth of continents through mountain-building processes (left) and the extreme stability and slow erosion that characterizes Earth’s oldest surviving terranes (right) provides a new understanding into the physical properties of the continents and forces operating to exhume them over geologic time. This erosional history and the link between these two images is made by reconstructing the thermal history of the lithosphere using U-Pb thermochronology, a temperature-sensitive geochronologic system, on lower crustal minerals such as rutile (inset).
(Image: © © Science/AAAS)

North Americans should breathe easy: New research confirms that the continent has eroded very little over the past 1.5 billion years and, in all likelihood, won’t shed much ground in the next billion years, either.

Although the conclusion sounds like a no-brainer — earth scientists have long suspected that the oldest parts of the North American landscape have been quite stable — it has been difficult to confirm. Now, using a specific set of geochemical markers, a team of researchers has found a way stitch together the continent’s erosional history over the past 2 billion years.

"Understanding and reproducing erosional history over billion-year timescales is something that's very, very difficult to do," said Terrence Blackburn, a geochemist at MIT who led the study. "That's really why this is so novel."

Blackburn and his team gathered ancient fragments of rock expelled from deep within the continental crust, called volcanic xenoliths, from a mountain belt in western Montana, part of the large North American Craton. Cratons are some of the oldest pieces of Earth's lithosphere, the hard outer layer that includes the planet's crust and a portion of the upper mantle. The team looked for geochemical markers of uranium and lead isotopes in the xenoliths , which record temperature changes within the rocks over long periods of time.

Temperature change is important, Blackburn explained, because large-scale erosion can actually change the temperature of the underlying continental crust.

"If you erode material away, isostasy" — or buoyancy between the Earth's crust and mantle — "is going to push samples from deep down up closer to the surface, making them cool faster," Blackburn told OurAmazingPlanet. By reconstructing the thermal histories of the rocks, Blackburn's team was able to estimate how much erosion has occurred over the region's 1.8-billion-year history.

The short answer is not very much — at least not recently. For the first 300 million years of the mountain belt's life, it grew and eroded very rapidly, Blackburn said. But in the 1.5 billion years since, the crust and mantle reached isostatic equilibrium, and the region has lost almost no additional mass to erosion.

Erosion around the globe

Ancient continental crust in other areas of the globe — such as the West African Craton and the Pilbara Craton in Western Australia — probably share similar histories, Blackburn said.

These resilient chunks of lithosphere contain some of the oldest rocks on earth and make up the stable cores of most continents. They all formed through spurts of fast, vigorous growth and erosion early on, as the relatively light continental crust bobbed up to rest on top of the denser mantle. Once this happened, the cratons stabilized and erosion nearly stopped. [Have There Always Been Continents?]

Until now, scientists had no reliable way of teasing out the timing of that transition from fast to slow erosion.

"An important message is that, although continents have a rapid early phase of growth and mountain-building as they are born," Blackburn said, "really the majority of their lifetime is spent in a period of extreme stability that lasts billions of years."