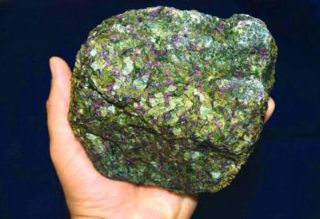 The key to enduring billions of years of hellish punishment from the crushing, searing conditions found miles underground, if you're a rock, is to get drained of any water that might weaken you, scientists now suggest.

The new finding would help explain how the continents keep from being swallowed back into the Earth.

The oldest rocks on Earth some dating back as much as 4.28 billion years all come from the cores of continents, known as cratons . For eons, these remnants from the planet's formative years have stubbornly withstood getting sucked down into the hot, churning rock of the upper mantle, known as the asthenosphere, which lies under the planet's rigid outer shell.

Cratons apparently owe their survival to "mantle roots" the portion of the Earth's mantle that lies beneath a craton. Mantle roots are intrinsically more buoyant than what they lie on, forming as they did in ancient melting events that removed much of the calcium, aluminum and iron that normally form dense minerals. In this way, mantle roots serve as rafts bobbing on the vigorously churning asthenosphere, and ancient cratons sat on them in comparative safety. Mantle roots are also cooler than the underlying mantle, making them stiffer and somewhat resistant to erosion from beneath.

Past calculations suggested this buoyancy and coolness were not enough to stop the destruction of mantle roots. The hotter temperatures widely thought to have existed in the Earth's mantle some 2.5 billion to 3 billion years ago should have softened up the base of these roots enough to gradually let them get eroded from below, leading to their eventual destruction.

Now, as an explanation for this mystery, scientists have found that samples from the deepest part of a mantle root were remarkably dry. This could mean that mantle roots might have survived all this time because they were stronger than the underlying mantle.

"The presence of very small quantities of water is known to weaken rocks and minerals," said researcher David Bell of Arizona State University.

The samples researchers analyzed were discovered in diamond mines of southern Africa, where the ancient crust of the Kaapvaal craton was pierced about 100 million years ago by gas-charged magmas called kimberlites. These magmas were generated at depths of roughly 125 miles (200 kilometers) beneath the mantle root and shot up rapidly in a matter of hours via deep fractures, bringing with them pieces of the rocks they passed (including diamonds). After erupting explosively at the surface, the magmas solidified into pipe-like bodies of kimberlite rock that were subsequently mined for their gems.

The roughly 3-billion-year-old rocks that the researchers investigated were made of peridotite, which is composed mainly of the dark-green mineral olivine. The researchers found that beyond a depth of about 112 miles (180 km), the water content of olivines progressively declined. At the very base of the mantle root, the olivines contained hardly any water less than 10 parts per million meaning they are very hard to break up.

"It is not the whole mantle root that has dry olivine, but only the very bottom part," said researcher Anne Peslier, a geologist at Jacobs Technology in Tullahoma, Tenn., and at NASA's Johnson Space Center in Houston. In attempts to describe the Earth's layers, "a colleague of mine said I showed that the 'avocado model' is winning that is, a hard shell protecting a softer interior."

The fact that the asthenosphere underlying the mantle roots holds more water roughly 50 to 150 parts per million would make it flow some 20 to more than 3,000 times more easily. This difference in viscosity would lead to a natural separation between the mantle roots and the rest of the mantle, much as honey naturally separates from water. This in turn would help keep the foundations that life-enabling cratons rest on from eroding away.

"Although we are in the speculative realm here, I suppose that yes, if continents had not existed, land animals would not have existed, and development of life would have been different," Peslier told Our Amazing Planet.

"Even without continents, volcanic islands would have protruded here and there, leaving the possibility for life to colonize them, but overall, the presence of continents, which group and break apart every several hundred million years or so, certainly had an influence on land life development and evolution pathways," she said. "They also affect ocean currents, and they allow nutrients to be brought to the oceans via erosion and river input, so their influence on marine life is not negligible."

Why the deepest parts of mantle roots are so dry is still a matter of speculation. One possibility is that the chemical conditions suspected to prevail at such depths would favor fluids rich in methane instead of water. Another possibility is that hot magmas generated in the upper mantle might have scavenged any water present as they passed through the base of a mantle root, transporting this water upward into the overlying shallower mantle.

Peslier and her colleagues plan to analyze samples from other cratons to see if their ideas hold there for instance, the Slave craton in Canada and the Siberian craton in Russia. Knowing how much water is present deep in other terrestrial planets and moons, such as Mars or the Earth's moon, could also be important to understanding their evolution, Peslier explained. She intends to analyze moon rocks and Martian meteorites for any water content to learn more about the history of those bodies.

The researchers detailed their findings in the Sept. 2 issue of the journal Nature.