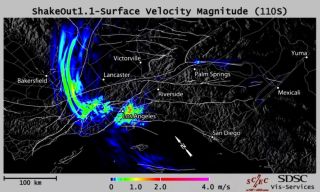 Virtual earthquakes predict greater shaking in the seismically precarious city of Los Angeles than in nearby areas, a new computer modeling study suggests. Shaking in the Los Angeles Basin could be three times larger on average than in the city's surroundings, the models show.

These virtual quakes could also predict the risks looming over many other cities across the world, especially those in locations with no recent history of large earthquakes.

Los Angeles and other cities sit on top of large sedimentary basins. These soft foundations can amplify the amount of damaging shaking these cities experience during an earthquake. For example, a recent study found that just such a basin sitting under Vancouver would amplify the shaking from an earthquake by three to four times. Other cities resting on top of sedimentary basins include Tokyo, Mexico City, Seattle and parts of the San Francisco Bay area.

"Predicting shaking from earthquakes is one of the most important things seismologists can do," earthquake seismologist Greg Beroza at Stanford University told LiveScience's OurAmazingPlanet. "It's what one needs to know to design structures that will resist earthquake shaking." [7 Ways the Earth Changes in the Blink of an Eye]

To understand why the soft sediments under cities like Vancouver and Los Angeles can make earthquake shaking worse, imagine taking a block of plastic foam, cutting out a bowl-shaped hole in the middle and filling the cavity with gelatin, said seismologist Eric Dunham at Stanford University. In this analogy, the plastic foam stands in for rocks, while the gelatin represents sediment, or dirt.

"The gelatin is floppier and a lot more compliant. If you shake the whole thing, you're going to get some motion in the Styrofoam, but most of what you're going to see is the basin oscillating," Dunham said in a statement.

The sedimentary basins pose greater risk for these earthquake-prone cities, Beroza said. "All of these cities are threatened by earthquakes, and the basins they are all built on top of can trap and amplify seismic waves," Beroza said.

A different kind of seismic wave

Some past simulations of earthquakes in Los Angeles have predicted very intense ground motion. However, scientists had not been able to validate those results with observations from real-life large earthquakes, since there have not been any in Los Angeles recently.

To overcome this challenge, researchers took advantage of the fact that earthquakes are not the only source of seismic waves. Continuous vibrations come from ocean waves interacting with the solid Earth, seismic waves that make up a large part of what is known as the ambient seismic field.

"These seismic waves are billions of times weaker than the seismic waves generated by earthquakes that we are worried about," Beroza said. "But they propagate through the same earth and carry much the same information about it [as earthquake-related waves], so we can use these weaker waves to anticipate the behavior of the larger waves."

Scientists have known about the ambient seismic field for about 100 years, but it was largely considered noise that interfered with their ability to study earthquakes. However, in the past decade, seismologists developed methods that helped them isolate some of the weak seismic waves that make up this field. By analyzing how these ambient waves moved underground, the researchers could predict the effects of much stronger waves from powerful earthquakes.

"The beauty of this technique, if I may be so immodest, is that rather than putting out scientific instruments and waiting for earthquakes to occur to predict more about their effects … we can actively work to anticipate how the ground will shake before earthquakes occur," Beroza said.

Earthquake seismologist Marine Denolle, now at the Scripps Institution of Oceanography in San Diego, installed a number of seismometers along the San Andreas Fault to measure these ambient waves. She and her colleagues then used the data they collected to run nearly 100 computer-simulated magnitude-7 earthquakes.

"We used our virtual earthquake approach to reconstruct large earthquakes on the southern San Andreas Fault and studied the responses of the urban environment of Los Angeles to such earthquakes," Denolle said in a statement.

Their findings support predictions made in 2006 by supercomputer models — that if the southern San Andreas Fault section of California ruptured and generated an earthquake, some of the seismic waves traveling northward would be funneled toward Los Angeles along a 60-mile-long (100 kilometers) natural conduit that connects the city with the San Bernardino Valley. This channel is made up mostly of sediments that amplify and direct waves toward the Los Angeles region.

"Once there, the waves reverberate and are amplified, causing stronger shaking than would otherwise occur," Beroza said in a statement.

Just such an effect was seen in the region during the 1994 Northridge earthquake, a temblor that caused substantial damage, particularly in Santa Monica, and helped refocus attention on studying the seismic hazards around Los Angeles, not just underneath the city. [Northridge Earthquake 20th Anniversary in Photos]

The researchers now plan to test their virtual earthquake approach with other cities built atop sedimentary basins. Since this method is relatively inexpensive, it could also help forecast earthquake effects in developing countries, the researchers said.

"You don't need large supercomputers to run the simulations," Denolle said in a statement.

In addition to forecasting earthquakes that have not yet occurred, this approach could also model ancient quakes, shedding light on a region's history.

"For an earthquake that occurred 200 years ago, if you know where the fault was, you could deploy instruments, go through this procedure, and generate seismograms for earthquakes that occurred before seismographs were invented," Beroza said.