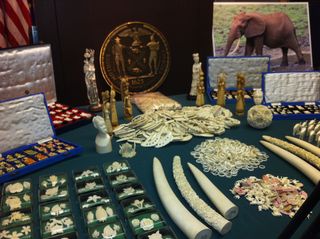 In 2012, the New York State Department of Environmental Conservation, in conjunction with the U.S. Fish and Wildlife Service, seized more than $2 million worth of elephant ivory in New York City.
(Image: © Manhattan District Attorney’s Office)

NEW YORK — Lawmakers will gather here in Manhattan tomorrow (Jan. 16) to examine the effectiveness of New York State's restrictions on the sale of ivory.

The Assembly Standing Committee on Environmental Conservation will hold a public hearing Thursday at 11 a.m. EST at the Assembly Hearing Room in Lower Manhattan to discuss the laws in place to curb the illegal sale of ivory and protect endangered species.

Despite the existence of these laws, New York is one of the largest markets for illegal ivory in the United States, according to the Wildlife Conservation Society (WCS), which is based in the city. In 2012, the New York State Department of Environmental Conservation, together with the U.S. Fish and Wildlife Service, seized more than $2 million worth of ivory in New York City. [In Images: 100 Most Threatened Species]

"Poachers have been illegally killing African elephants for years, bringing them to the brink of extinction," Assemblyman Robert K. Sweeney, chair of the committee, said in a statement. "It's disturbing that New York has become one of the main points of entry for the illegal ivory trade. Not only does this illegal market cause further destruction to an endangered species, but some of the proceeds of the trade go to fund terrorism. I have called this hearing to learn how New York State can help put a stop to these reprehensible actions."

Ivory poaching was banned in Africa in 1989, but elephant populations are still at risk, as poachers continue to strip them of their ivory tusks to sell in domestic and lucrative black markets.

WCS estimates that 96 elephants are killed each day by poachers in Africa, which is roughly one elephant death every 15 minutes. These illicit killings have contributed to a 76 percent decline in elephant populations since 2002, according to WCS officials.

"The New York seizure is evidence of a disturbing fact: There is a direct link between the illegal ivory trade in New York State and the slaughter of elephants in Africa," John Calvelli, executive vice president for public affairs at the WCS, said in a statement. "We are extremely grateful that the New York State Assembly Standing Committee on Environmental Conservation, under the leadership of Chairman Sweeney, is taking the illegal ivory trade in New York so seriously."

Ivory tusks are primarily used for carved art and jewelry. Funds from the sale of illegal ivory have been used to fuel a range of other illicit activities, including human trafficking and the trade of arms and narcotics, representatives from the World Wildlife Fund have said.

In November 2013, the U.S. destroyed six tons of ivory carvings, jewelry and other trinkets that had been collected by the U.S. Fish and Wildlife Service through smuggling busts and confiscations. The high-profile ivory crush was staged to send a global message that the material should no longer be used in commercial products.