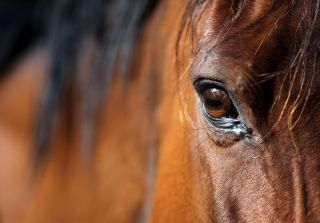 Broken bones keep a horse from moving, which slows down the heart and reduces blood flow.
(Image: © Arabian horse via Shutterstock)

Mayor Bill de Blasio recently presented a plan to ban horse-drawn carriages, an action that has led to an outpouring of discussion about whether or not the carriages are a treasured tradition or a burden on the animals in service.

The Humane Society of the United States supports the mayor's plan, and we call on the New York City Council to support his effort — and to reject the obstructionist tactics and phony arguments of the so-called Alliance for Truth.

One of the lead organizations trying to make sure that cars, trucks and horse-drawn carriages have to dodge and weave in New York City streets around Central Park, The Alliance for Truth is a Missouri-based public-relations outfit, and they have previously defended puppy mills and opposed efforts to upgrade anti-cruelty laws. This is the same extremist organization that orchestrated fights to block Prop B in Missouri in 2010 and Measure 5 in North Dakota — the first of which sought to impose basic standards of care for dogs in large-scale breeding facilities in the largest puppy-mill state in the nation and the second sought to make the Peace Garden State the 49th to make malicious cruelty a felony.

During the recent mayoral campaign, just about all of New York's major candidates — Republicans and Democrats, including former New York Comptroller William Thompson, Jr., who conducted a high-profile audit of the carriage-horse [1]industry in 2007 — pledged to end the continued use of carriage horses in and around Central Park.

"The agencies entrusted with oversight here have dropped the ball," said the comptroller after the release of that report, noting that horses were not provided with enough water, risked overheating on hot asphalt and lacked proper veterinary care.

The idea of banning the horse-drawn carriages — which are not used for point-to-point travel, but for sight-seeing in and around Central Park — has long been backed by the major animal welfare groups, including The HSUS and the American Society for the Prevention of Cruelty to Animals (ASPCA), which have voluntarily spent considerable resources in an attempt to oversee street and stable conditions for the horses.

In December, authorities arrested a carriage horse driver and charged him with animal cruelty after police observed him working an injured horse named Blondie, who had been in pain for days. And, there have been dozens of documented accidents resulting in injuries and deaths of New York City's carriage horses through the years: Horses may be easily spooked by vehicles or other loud noises and put themselves and others at risk by dashing into traffic.

The HSUS will continue to work with New Yorkers for Clean, Livable and Safe Streets (NYCLASS) to pass Int. 86a, legislation that would phase out horse carriages and replace them with eco-friendly antique replica cars. Passage of the law would also bolster the local tourist economy by giving current carriage drivers the opportunity to drive electric, antique, replica "Horseless Carriages" — a win-win solution that protects both jobs and the safety and welfare of horses and people in New York City. Other great global cities do without horse-drawn carriages, including Beijing, London and Paris.

Currently, there are no laws protecting horses from being sent to slaughter after they are "spent" by carriage service, so it is significant that Int. 86a also calls for the immediate humane retirement of more than 200 carriage horses. The HSUS enthusiastically supports this provision and offers to provide life-long, direct care for some of the carriage horses at the Cleveland Amory Black Beauty Ranch, in Murchison, Texas. The world-famous animal sanctuary — the largest and most diverse in the country — is operated by HSUS affiliate The Fund for Animals, which has had its headquarters located around the corner from Central Park since its founding in 1967 by the late Cleveland Amory.

Cleveland loved the last lines of the novel Black Beauty: "I have nothing to fear; and here my story ends. My troubles are all over, and I am at home." And that's the kind of life we can offer these animals once the political fight over their future has ended.

There's no need for horse-drawn carriages in New York City and there's a plan to provide an alternative for tourists seeking tours of Central Park. There are inherent risks to the safety of horses and humans that cannot be solved with additional regulations. We enthusiastically back Mayor de Blasio's effort.

Pacelle's most recent Op-Ed was "This Holiday Season, Consumers Demand Humanely Raised Food" This article was adapted from "Time to Move Away from Horse and Buggy in NYC and Into Safer, More Humane World," which first appeared on the HSUS blog A Humane Nation. The views expressed are those of the author and do not necessarily reflect the views of the publisher. This version of the article was originally published on LiveScience.