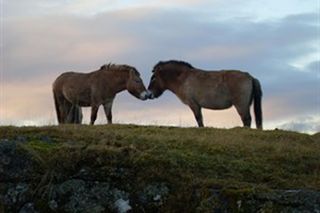 Przewalski’s horses Hero (left) and Sara share a nuzzle at Scotland’s Highland Wildlife Park. They are part of an endangered species that is the only true wild horse left on Earth.
(Image: © Una Richardson.)

Keepers at Scotland's Highlands Wildlife Park managed to catch a loving moment between two of their animals, just in time for Valentine's Day.

Two Przewalski's horses, mare Sara and stallion Hero, were photographed nuzzling each other in their park enclosure.

Przewalski's horses, native to the steppes of central Asia, are the only true wild horses left on the planet. Once listed by the International Union for Conservation of Nature as "extinct in the wild," the discovery of a single mature individual in the wild caused the species to be re-listed as Critically Endangered, according to the IUCN entry on the species.

More of the horses were re-introduced from captivity into the wild to bolster the species, and it is now listed as Endangered, with a small wild population of only about 250 in Mongolia, according to a park release. About 1,500, including Sara and Hero, are kept in captive breeding programs around the world.

Hero was introduced to the park in September, and observers quickly spottedHeroand Sara displaying mating behavior, such as nibbling and grooming. The horses' keepers hope that foals are in the future for the pair, which would help ensure the continuation of their species.

The horses are still threatened by disease, loss of genetic diversity by virtue of their small numbers, hybridization with domestic horses with which they can mate, as well as isolated disasters that could reduce the wild population, according to the IUCN.