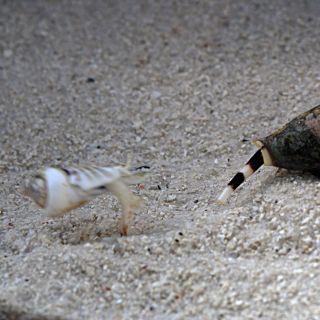 Ocean acidification might make it harder for conch snails to get away from their enemies.
(Image: © ARC Centre of Excellence for Coral Reef Studies)

Some species of conch snails depend on a strong foot to hop away from predators, such as the cone shell, which attacks its prey with a venomous, dartlike tooth.

In the new study, scientists tested how conch snails of the species Gibberulus gibbosus reacted when placed in a tank with their enemies. (A clear, protective barrier separated the creatures so that they weren't harmed during the study.) Some tanks were filled with water of the pH level projected in the oceans by 2100. (A pH is a measure of how acidic or basic a substance is on a scale from 0 to 14, with lower numbers being more acidic and a 7 representing a neutral pH.)

The experiments showed that the snails' leaping skills were limited when exposed to lower pH. The snails generally didn't jump as far, and sometimes didn't jump at all, compared with their counterparts under today's pH conditions, the study found. [Amazing Mollusks: Images of Strange & Slimy Snails]

The study scientists said they suspect this impaired jumping is the result of lower pH levels disrupting a neurotransmitter the animals rely on to trigger the jumping response to threats.

"This neurotransmitter receptor is common in many animals, and evolved quite early in the animal kingdom," study researcher Göran Nilsson, from the University of Oslo, said in a statement.

The oceans have become 30 percent more acidic since the dawn of the Industrial Revolution, because of rising carbon dioxide in the atmosphere, some of which gets absorbed into the world's water, the study's authors noted.

Conservationists are worried about the trend of ocean acidification, because lower pH levels have been shown to thin the shells of marine animals, send corals into decline and even cause anxiety in some fish. The new research adds the conch snail to the list of creatures with a potentially grim prognosis in a more acidic future.

The scientists say more work is needed to find out whether conch snails could adapt quickly enough to keep up with the rapid pace of ocean acidification. That work might start with figuring out whether conch snails with certain genes are more tolerant of elevated carbon dioxide levels, and whether this trait could spread quickly enough throughout their populations in response to changes in the pH of their habitats.

The research was detailed in the Proceedings of the Royal Society B.