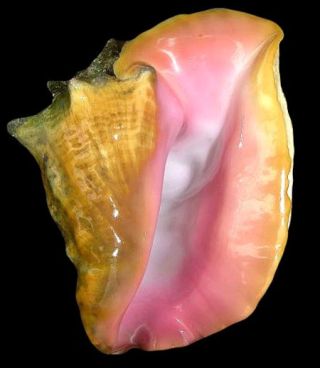 Researchers say they have invented the first successful method for culturing pearls from the queen conch. Here, an image of the conch shell.
(Image: © FAU's Harbor Branch Oceanographic Institution)

The queen conch, a marine snail, lures shell collectors with its unique, spire-shaped shell, but the mollusk also produces lustrous, deep-pink pearls. For years, people have attempted, with little success, to farm such pearls. Now, scientists say they have developed the first reliable technique for culturing conch pearls.

The scientists say the cultured pearls wouldn't reach the market for at least 18 months to two years.

In nature, pearls form when a sand grain or other irritant gets into the shell of a mollusk, and the sea creature covers the bit with layers of fibrous crystal. People can "seed" pearls by adding a "nucleus," which is usually a piece of shell, along with mollusk tissue.

While other mollusks, including oysters and freshwater mussels, have been successfully cultured for many years, the queen conch remained to be conquered. Past attempts have been unreliable, resulting in just a few cultured conch pearls.

One of the biggest challenges is figuring out how to extract the pearl from its hiding spot inside the oddly-shaped conch shell without killing the animal. That's not the case for oysters. "An oyster has two shells and you can slightly open it and you can get in to see the animal," said Megan Davis of Florida Atlantic University's Harbor Branch Oceanographic Institution. "With a [conch] there’s only one opening to be able to access the animal, so it makes it a little bit more difficult."

Davis and her colleague Héctor Acosta-Salmón invented a proprietary technique similar to that used in culturing oyster pearls. So far, the process has yielded more than 200 conch pearls over 2.5 years, including so-called beaded pearls, which require a nucleus, and non-beaded pearls, which only need a piece of mollusk tissue called the mantle.

"200 pearls is a breakthrough number," Davis said. Although the number of pearls produced with previous methods has not been officially documented, Davis estimates it is less than six.

Out of the 50 or so conchs the researchers cultured in tanks, about 80 percent produced a pearl, Davis told LiveScience, adding that all of such pearl-making conchs survived. It is crucial that the conchs live, since wild populations of this mollusk have been severely depleted from commercial fishing.

Davis expects their invention will have a significant impact on the pearl industry. "It will provide the industry with a new gem; there has never been a cultured conch pearl on the market," said Davis. "The idea is not to compete with the natural pearl, but to make a new product available."

The price of natural conch pearls is likely to stay the same or even increase as cultured pearls are brought to the market, though cultured pearls would become cheaper, Davis said.

Such prices are based on pearl size, which is measured in carats, as well as luster and color, which varies and includes white, light pink, peach, yellow and deep pink. The darker pink pearls are typically more popular. Natural conch pearls are typically two to five carats, with consumers spending from $800 to $2,000 for a high-quality one.

The size of the cultured conch pearls is controlled by the nucleus size and culture time. The researchers have tested out culture times ranging from six months to two years.

The results of the research will be published in a forthcoming issue of the journal Gems & Gemology.