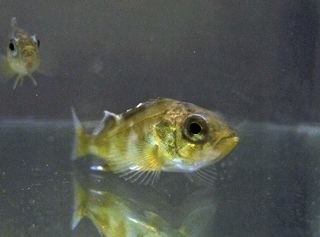 Ocean acidification, which is caused by rising levels of carbon dioxide in the atmosphere being absorbed into the sea, has made many worry because of the problems it will likely create, such as a decline in shellfish and coral reefs. But humans may not be alone in their anxiety: Ocean acidification threatens to make fish more anxious as well (and not because they are reading about ocean acidification on LiveScience.com. At least so far as we know.)

A new study found that after being placed for a week in an aquarium with acidic seawater — as acidic as the oceans are expected to be on average in a century's time — juvenile rockfish spent more time in a darkened corner, a hallmark of fish anxiety, and the same behavior exhibited by fish given an anxiety-inducing drug.

"They behaved the same way as fish made anxious with a chemical," said Martin Tresguerres, a marine biologist at the Scripps Institution of Oceanography at the University of California, San Diego.

Fish raised in unadulterated seawater taken from off Southern California's coast, however, spent an equal amount of time in the light and dark parts of the aquarium, Tresguerres told LiveScience.

After researchers placed the acid-stressed fish back into unaltered seawater, the animals showed continued signs of anxiety for more than a week, before finally returning to normal on the 12th day, the researchers reported.

Several other studies, mostly from Australia, have shown that acidified seawater causes changes in sensory input, sensory processing and possibly cognitive abilities in several species of fish, said Martin Grosell, a marine biologist at the University of Miami who wasn't involved in the study.

This is one of the first times the same results have been demonstrated in cold water fish, and shows that acidification threatens to inflict many concerning effects on the animals, including on their behavior, Grosell told LiveScience.  [Video: Humans Hit the Oceans Hard]

Tresguerres said that the study's results couldn't yet be directly applied to the natural world, since acidification is expected to take place gradually over the next century.

However, for brief periods each year, the seawater off the U.S. West Coast becomes even more acidic than the acidified water used in the study, published Nov. 27 in the journal Proceedings of the Royal Society B. This happens when acidic water from the deep sea rises to the surface in a cyclical fashion.

Although acidity in the world's oceans naturally varies, the increase in atmospheric carbon dioxide has made the world's oceans 30 percent more acidic than before the beginning of the Industrial Revolution, the study noted, making these temporary spikes in acidity worse. In the Baltic Sea, levels of acidity have been recorded at twice those used in the study, Grosell added.

This all means the study could have direct bearing on fish in the natural environment, Grosell said.

It's hard to know how big of a concern anxious fish pose, but if fish experience more anxiety due to ocean acidification, it certainly won't help them. Laboratory tests have shown that several species of Australian fish stressed by acidity were less likely to survive when returned to the ocean, Grosell said.

The study, co-authored by Trevor Hamilton and Adam Holcombe at MacEwan University in Edmonton, Canada, found that acidic waters in turn acidify the fish's blood. This creates a cascade of changes that interfere with activity of gamma-aminobutyric acid type A (GABA-A) receptors in the fish's brain, which are important for many functions, including behavior, Tresguerres said. The same receptors also play a role in anxiety in humans, and other animals.