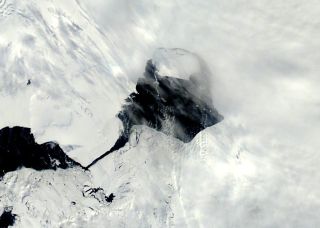 Though typically thought of as a tropical climate pattern, the influence of La Niña (the cold counterpart to El Niño) spreads as far as Antarctica, significantly slowing the melting rate of one of the continent's largest glaciers, according to a new study.

Pine Island Glacier, which makes up about 10 percent of the West Antarctic Ice Sheet, empties into the Amundsen Sea. The glacier's ice shelf (the part of it that floats atop the water and acts kind of like a doorstop to the rest of the glacier) has been thinning since at least the 1970s, when scientists first started recording its behavior. This thinning causes the glacier to flow more quickly toward the sea, and the faster flow drives the thinning of the rest of the glacier. The melting appears to originate from below, as relatively warm ocean water trickles through a gap between the base of the glacier and the land it rests on, lubricating the river of ice and pushing it seaward, where it periodically disintegrates into icebergs(a natural process known as calving).

Researchers previously believed that this disintegration has occurred steadily over time, in concert with steadily increasing average global atmospheric and oceanic temperatures. But new analyses from a team of researchers with the British Antarctic Survey shows that the glacier is more sensitive to sporadic weather and climate anomalies, such as La Niña events, than previously thought. [The Harshest Environments on Earth]

During a La Niña event, cold-water masses extend up the coast of South America and into the central equatorial Pacific. (During an El Niño event, warmer-than-average waters predominate.) Eventually, the cold water gets pulled into a water mass known as the Circumpolar Deep Water, which sweeps by the continental shelf nearby Pine Island Glacier.

But observations taken in January 2012 during a La Niña event show that a mass of cold water appears to have been thick enough to breach the ridge and keep the glacier's underbelly cool, preventing excessive melting and resulting in the lowest summer melting on record, producing about half as much meltwater as that which occurred in January 2010, the last time similar observations of the area were made.

"This enormous, and unexpected, variability contradicts the widespread view that a simple and steady ocean warming in the region is eroding the West Antarctic Ice Sheet," study co-author Pierre Dutrieux, of the British Antarctic Survey, said in a statement.

The researchers were surprised to find that the glacier was so vulnerable to these short-term climate anomalies.

"It is not so much the ocean variability, which is modest by comparison with many parts of the ocean, but the extreme sensitivity of the ice shelf to such modest changes in ocean properties that took us by surprise," study co-author Adrian Jenkins, also from the British Antarctic Survey, said in a statement.

As Pine Island Glacier melts, it contributes to global sea level rise, which could reach 10 to 16 feet (3 to 5 meters) above current levels if the entire West Antarctic Ice Sheet were to melt. The researchers say that if these La Niña events were to occur more frequently in the future, the glacial melting rate would slow down substantially and rising sea levels could subside. However, the scientists say they have no evidence suggesting this will be the case, and they expect the glacier to continue melting and disintegrating through the rest of the century.